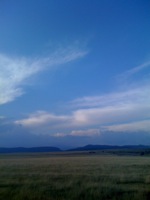 The sky is the part of the atmosphere or of outer space visible from the surface of any astronomical object. It is difficult to define precisely for several reasons. During daylight, the sky of Earth has the appearance of a deep blue surface because of the air's scattering of sunlight. The sky is sometimes defined as the denser gaseous zone of a planet's atmosphere. At night the sky has the appearance of a black surface or region scattered with stars.

In the field of astronomy, the sky is also called the celestial sphere. This is an imaginary dome where the sun, stars, planets, and the moon are seen to be traveling. The celestial sphere is divided into regions called constellations.[1]

For only when you experience the stillness are you in complete knowledge of His presence and only as you carry your understanding of grace with you into your arena are you capable of maintaining that quality which allows you to prevail with men in such a way as to maintain your own sense of balance and solidarity -- that is to say: your head in the clouds and your feet on the ground -- and this condition is evidence of a well-unified personality operating in the fullest capacity known to him at that time. - Tomas