From Nordan Symposia
(Redirected from Slaves)
Jump to navigationJump to search 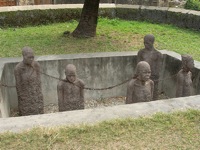 Slavery is a form of forced labor in which people are considered to be, or treated as, the property of others. Slaves can be held against their will from the time of their capture, purchase or birth, and deprived of the right to leave, to refuse to work, or to receive compensation (such as wages). Evidence of slavery predates written records, and has existed to varying extents, forms and periods in almost all cultures and continents.[1] In some societies, slavery existed as a legal institution or socio-economic system, but today it is formally outlawed in nearly all countries. Nevertheless, the practice continues in various forms around the world.[2][3].

For lessons on the topic of Slavery, follow this link.

Freedom from slavery is an internationally recognized human right. Article 4 of the Universal Declaration of Human Rights states:

No one shall be held in slavery or servitude; slavery and the slave trade shall be prohibited in all their forms.[4]

In his book about the slave trade and the American Revolution, author Charles Rappleye writes:

In the West Indies in particular, but also in North and South America, slavery was the engine that drove the mercantile empires of Europe. The institution was as old as time - finding explicit sanction in the Bible, and in the glory days of Greece and Rome - and had flourished, in its modern form, for two hundred years. It appeared, in the eighteenth century, as universal and immutable as human nature. [5]

The English word slave derives - through Old French and Medieval Latin - from the medieval word for Slavic people of Central and Eastern Europe, who were the last ethnic group to be captured and enslaved in Central Europe.[6][7] For thousands of years, according to Adam Smith and Auguste Comte, a slave was principally defined as a captive or prisoner of war.[1]

b. fig. The condition or fact of being entirely subject to, or under the domination of, some power or influence.
c. A state of subjection or subordination comparable to that of a slave; also with pl., an instance of this.

The modern idea of sex equality is beautiful and worthy of an expanding civilization, but it is not found in nature. When might is right, man lords it over woman; when more justice, peace, and fairness prevail, she gradually emerges from slavery and obscurity. Woman's social position has generally varied inversely with the degree of militarism in any nation or age.[2]

Slavery as a Factor in Civilization