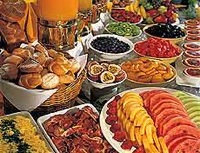 The Swedish word smörgåsbord consists of the words smörgås (open-faced sandwich) and bord (table). Smörgås in turn consists of the words smör (butter, cognate with English smear) and gås (goose). Gås literally means goose, but later referred to the small pieces of butter that formed and floated to the surface of cream while it was churned. These pieces reminded the old Swedish peasants of fat geese swimming to the surface. The small butter pieces were just the right size to be placed and flattened out on bread, so smörgås came to mean buttered bread. In Sweden, the term breda smörgåsar (to butter open-faced sandwiches) has been used since at least the 16th century.

In English and also in Scandinavian languages, the word smörgåsbord (or in English, more usually without diacritics as smorgasbord) refers loosely to any buffet with a variety of dishes. In an extended sense, the word is used to refer to any situation which invites patrons to select whatever they wish among lots of pleasant things, such as the smorgasbord of university courses, books in a bookstore, etc.

The term smörgåsbord should not be confused with the somewhat similarly-named Danish smørrebrød.

Smörgåsbord is a type of Scandinavian meal served buffet-style with multiple dishes of various foods on a table, originating in Sweden. In Norway it is called koldtbord, in Denmark it is called det kolde bord, in Finland seisova pöytä, in Iceland it is called hlaðborð, in Latvia "Aukstais galds" and in Estonia rootsi laud (meaning Swedish table). Smörgåsbord became internationally known as Smorgasbord at the 1939 New York World's Fair when it was offered at the Swedish Pavilion's "Three Crowns Restaurant." It is typically a celebratory meal and guests can help themselves from a range of dishes laid out for their choice. In a restaurant, the term refers to a buffet-style table laid out with many small dishes from which, for a fixed amount of money, one is allowed to choose as many as one wishes.[1]