From Nordan Symposia
(Redirected from Solitary)
Jump to navigationJump to search 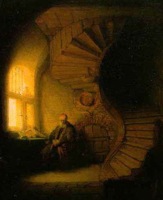 Solitude is a state of seclusion or isolation, i.e. lack of contact with people. It may stem from bad relationships, deliberate choice, contagious disease, disfiguring features, repulsive personal habits, mental illness, or circumstances of employment or situation.

Short-term solitude is often valued as a time when one may work, think or rest without being disturbed. It may be desired for the sake of privacy. Many religions promote solitude for meditation.

A distinction can be made between physical and mental seclusion. People may seek physical seclusion to remove distractions and make it easier to concentrate, reflect, or meditate. However, this is not necessarily an end in and of itself. Once a certain capacity to resist distractions is achieved, people become less sensitive to distractions and more capable of maintaining mindfulness and staying inwardly absorbed and concentrated. Such people, unless on a mission of helping others, don't seek any interaction with the external physical world. Their mindfulness is their world, at least ostensibly.

For lessons on the related topic of Solitude, follow this link.

Symptoms from externally imposed isolation often include anxiety, sensory illusions, or even distortions of time and perception. However, this is the case when there is no stimulation of the sensory systems at all, and not only lack of contact with people. Thus, by having other things to keep one's mind busy, this is avoided. [1]

Still, long-term solitude is often seen as undesirable, causing loneliness or reclusion resulting from inability to establish interpersonal relationships. Furthermore, it might even lead to clinical depression. However, for some people, solitude is not entirely depressing. Still others (e.g. monks) regard long-term solitude as a means of spiritual enlightenment. Indeed, marooned people have been left in solitude for years without any report of psychological symptoms afterwards.

John T. Cacioppo's, University of Chicago, 2008 book, Loneliness: Human Nature and the Need for Social Connection, outlines five distinct pathways through which social isolation contributes to increased illness and early death. He also offers an evolutionary rationale for why the subjective sense of social isolation--loneliness--is so profoundly disruptive to human physiology that it impairs cognition and will power, alters DNA transcription in immune cells, and leads over time to high blood pressure. ISBN 978-0-393-06170-3

Enforced loneliness (solitary confinement) has been a punishment method throughout history. It is often considered a form of torture. In contrast, some psychological conditions (such as schizophrenia) are strongly linked to a tendency to seek solitude.

Protective isolation is the type of isolation created in tests. This can usually be classified by the fact that one can opt out of the experiment, or the isolation. It can often be prepared for, and is generally not a negative thing. (More often than not, there is a reward for the subject's time as an experiment.) Source isolation includes no benefits, and cannot be prepared for. Thus, it is usually undesirable, and is not very common.

Emotional isolation is a term used to describe a state of isolation where the individual is emotionally isolated, but may have a well functioning social network.

Solitude does not necessarily entail feelings of loneliness coming into picture of an internal desire as opposed to an unmet longing for social contact. In the context of religious forms of solitude, persons who prefer silence find immense pleasure in their uniformity with cosmos even in a single room. Buddha attained enlightenment through uses of meditation, depriving sensory input and bodily necessities, namely external desire sought throughout social interaction as one of them. The context of solitude is attainment of pleasure from within, rather than seeking it in the external world. In references of psychology, as introverted individuals require spending time alone away from people to recharge, or are simply socially apathetic might find it a pleasurable environment to be busied with solitary preoccupations.

In addition, psychiatric institutions may also institute full isolation or partial isolation for certain patients, particularly the violent or subversive, in order to minister to their particular needs and protect the rest of the recovering population from their influence.

Evolutionary man does not naturally relish hard work. To keep pace in his life experience with the impelling demands and the compelling urges of a growing religious experience means incessant activity in spiritual growth,intellectual expansion, factual enlargement, and social service. There is no real religion apart from a highly active personality. Therefore do the more indolent of men often seek to escape the rigors of truly religious activities by a species of ingenious self-deception through resorting to a retreat to the false shelter of stereotyped religious doctrines and dogmas. But true religion is alive. Intellectual crystallization of religious concepts is the equivalent of spiritual death. You cannot conceive of religion without ideas, but when religion once becomes reduced only to an idea, it is no longer religion; it has become merely a species of human philosophy.[2]