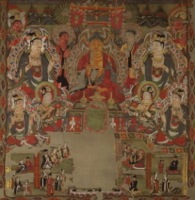 Sūtra (Sanskrit: सूत्र, Pāli: sutta, Ardhamagadhi: sūya) is an aphorism (or line, rule, formula) or a collection of such aphorisms in the form of a manual or, more broadly, a text in Hinduism or Buddhism. Literally it means a thread or line that holds things together and is derived from the verbal root siv-, meaning to sew. These words, including Latin suere and English to sew, all ultimately deriving from PIE *siH-/syuH- 'to sew'), as does the medical term "suture." The word "sutra" was very likely meant to apply quite literally to these texts, as they were written down in books of palm leaves sewn together with thread. This distinguishes them from the older sacred Vedas, which until recently were only memorised, never committed to paper.

In ancient Indian literature, sutra denotes a distinct type of literary composition, based on short aphoristic statements, generally using various technical terms. This literary form was designed for concision, as the texts were intended to be memorized by students in some of the formal methods of scriptural and scientific study (Sanskrit: svādhyāya). Since each line is highly condensed, another literary form arose in which commentaries (Sanskrit: bhāṣya) on the sutras were added, to clarify and explain them.

In Brahmin lineage, each family is supposed to have one Gotra, and one Sutra, meaning that a certain Veda (Śruti) is treasured by this family in way of learning by heart.

One of the most famous definitions of a sutra in Indian literature is itself a sutra and comes from the Vayu Purana:

Of minimal syllabary, unambiguous, pithy, comprehensive,
continuous, and without flaw: who knows the sūtra knows it to be thus.

In Jainism, sūtra refers to canonical sermons of the Mahavira contained in the Jain Agamas, and to some later (post-canonical) normative texts.

In Buddhism, the sūtra refers mostly to canonical scriptures, many of which are regarded as records of the oral teachings of Gautama Buddha. In Chinese, these are known as 經 (pinyin: jīng). These teachings are assembled in part of the Tripitaka which is called Sutra Pitaka. There are also some Buddhist texts, such as the Platform Sutra, that are called sūtras despite being attributed to much later authors.

In the book "Modern Buddhism", Geshe Kelsang Gyatso defines sūtra as "The teachings of Buddha that are open to everyone to practice without the need for empowerment. These include Buddha's teachings of the three turnings of the dharma wheel.

Some scholars consider that the Buddhist use of sūtra is a mis-Sanskritization of Prakrit or Pali sutta, and that the latter represented Sanskrit sūkta, "well spoken", "good news" (as the Buddha himself refers to his speech in his first sermon; compare the original meaning of Gospel), which would also resolve as sutta in Pali. The early Buddhist sutras do not present the aphoristic, nearly cryptic nature of the Hindu sutras, even though they also have been designed for mnemonic purposes in an oral tradition. On the contrary, they are most often lengthy, with many repetitions which serve the mnemonic purpose of the audience. They share the character of sermons of "good news" with the Jaina sūtras, whose original name of sūya (in Ardhamagadhi language) can derive from Sanskrit sūkta, but hardly from sūtra.

The Pali form of the word, sutta is used exclusively to refer to the scriptures of the early Pali Canon, the only texts recognized by Theravada Buddhism as canonical. [1]