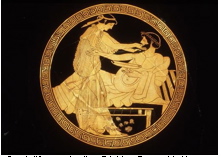 Symposium (Symposia, pl.) originally referred to a drinking party (the Greek verb sympotein means "to drink together") but has since come to refer to any academic conference. The sympotic elegies of Theognis of Megara and two Socratic dialogues, Plato's Symposium and Xenophon's Symposium all describe symposia in the original sense.