From Nordan Symposia
(Redirected from Synchronize)
Jump to navigationJump to search 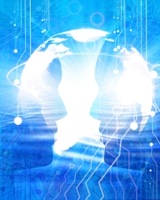 Synchronization or synchronisation[1] is timekeeping which requires the coordination of events to operate a system in unison. The familiar conductor of an orchestra serves to keep the orchestra in time. Systems operating with all their parts in synchrony are said to be synchronous or in sync. Some systems may be only approximately synchronized, or plesiochronous. For some applications relative offsets between events need to be determined, for others only the order of the event is important.

Today, synchronisation can occur on a global basis due to GPS-enabled timekeeping systems.

b. trans. To cause to be, or represent as, synchronous; to assign the same date to; to bring together events, etc. belonging to the same time. Also absol.

b. trans. To cause to go at the same rate; spec. to cause (a timepiece) to indicate the same time as another.
c. In technical senses: to cause to coincide in time; to operate simultaneously or in synchronization. Also intr.

Apart from its use for navigation (see John Harrison), synchronization was not important in transportation until the nineteenth century, when the coming of the railways made travel fast enough for the differences in local time between adjacent towns to be noticeable (see [1]).

In some territories, sharing of single railroad tracks was controlled by the timetable. Thus strict timekeeping was a safety requirement. To this day, railroads can communicate and signal along their tracks, independently of other systems for safety.

The lessons of timekeeping are part of engineering technology. In electrical engineering terms, for digital logic and data transfer, a synchronous object requires a clock signal. Timekeeping technologies such as the GPS satellites and Network time protocol (NTP) provide real-time access to a close approximation to the UTC timescale, and are used for many terrestrial synchronisation applications.

Synchronisation is also an important concept in the following fields:

Telecommunication Physics (The idea of simultaneity has many difficulties, both in practice and theory.) Photography Music (rhythm) Neuroscience

Some uses of synchronization

While well-designed time synchronization is an important tool for creating reliable systems, excessive use of synchronization where it is not necessary can make systems less fault-tolerant, and hence less reliable.

The term synchronization is also sometimes used for the transfer of content from a computer to an MP3 player connected to it.