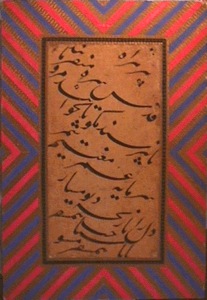 In the name of Allah, the Beneficent, the Merciful.

[67.1] Blessed is He in Whose hand is the kingdom, and He has power over all things,

[67.2] Who created death and life that He may try you-- which of you is best in deeds; and He is the Mighty, the Forgiving,

[67.3] Who created the seven heavens one above another; you see no incongruity in the creation of the Beneficent God; then look again, can you see any disorder?

[67.4] Then turn back the eye again and again; your look shall '~ come back to you confused while it is fatigued.

[67.5] And certainly We have adorned this lower heaven with ( lamps and We have made these missiles for the Shaitans, and We have prepared for them the chastisement of burning.

[67.6] And for those who disbelieve in their Lord is the punishment of hell, and evil is the resort.

[67.7] When they shall be cast therein, they shall hear a loud moaning of it as it heaves,

[67.8] Almost bursting for fury. Whenever a group is cast into it, its keeper shall ask them: Did there not come to you a warner?

[67.9] They shall say: Yea! indeed there came to us a warner, but we rejected (him) and said: Allah has not revealed anything, you are only in a great error.

[67.10] And they shall say: Had we but listened or pondered, we should not have been among the inmates of the burning fire.

[67.11] So they shall acknowledge their sins, but far will be (forgiveness) from the inmates of the burning fire.

[67.12] (As for) those who fear their Lord in secret, they shall surely have forgiveness and a great reward.

[67.13] And conceal your word or manifest it; surely He is Cognizant of what is in the hearts.

[67.15] He it is Who made the earth smooth for you, therefore go about in the spacious sides thereof, and eat of His sustenance, and to Him is the return after death.

[67.16] Are you secure of those in the heaven that He should not make the earth to swallow you up? Then lo! it shall be in a state of commotion.

[67.17] Or are you secure of those in the heaven that He should not send down upon you a punishment? Then shall you know how was My warning.

[67.18] And certainly those before them rejected (the truth), then how was My disapproval.

[67.19] Have they not seen the birds above them expanding (their wings) and contracting (them)? What is it that withholds them save the Beneficent God? Surely He sees everything.

[67.20] Or who is it that will be a host for you to assist you besides the Beneficent God? The unbelievers are only in deception.

[67.21] Or who is it that will give you sustenance if He should withhold His sustenance? Nay! they persist in disdain and aversion.

[67.22] What! is he who goes prone upon his face better guided or he who walks upright upon a straight path?

[67.23] Say: He it is Who brought you into being and made for you the ears and the eyes and the hearts: little is it that you give thanks.

[67.24] Say: He it is Who multiplied you in the earth and to Him you shall be gathered.

[67.27] But when they shall see it nigh, the faces of those who disbelieve shall be sorry, and it shall be said; This is that which you used to call for.

[67.28] Say: Have you considered if Allah should destroy me and those with me-- rather He will have mercy on us; yet who will protect the unbelievers from a painful punishment?

[67.29] Say: He is the Beneficent God, we believe in Him and on Him do we rely, so you shall come to know who it is that is in clear error.

[67.30] Say: Have you considered if your water should go down, who is it then that will bring you flowing water?