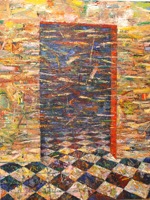 b (1) : end, boundary; specifically : the end of a runway (2) : the place or point of entering or beginning : outset <on the threshold of a new age>

b : a level, point, or value above which something is true or will take place and below which it is not or will not

Sensory threshold is a theoretical concept used in psychophysics. A stimulus that is less intense than the sensory threshold will not elicit any sensation. Methods have been developed to measure thresholds in any of the senses.

﻿When related to motion in any of the possible six degrees of freedom (6-DoF), the fact that sensory thresholds exist is why it is essential that aircraft have blind-flying instruments. Sustained flight in cloud is not possible by `seat-of-the-pants' cues alone since errors build up due to aircraft movements below the pilot's sensory threshold, ultimately leading to loss of control.