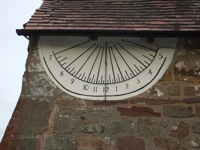 A tithe (pronounced /ˈtaɪð/; from Old English teogoþa "tenth") is a one-tenth part of something, paid as a (usually) voluntary contribution or as a levy or tax-like payment (technically not a tax as it is not paid to a level of government), usually to support a religious organization. Today, tithes (or tithing) are normally voluntary and paid in cash, cheques, or stocks, whereas historically tithes were required to be paid in kind, such as agricultural products (that grown of the land, or fruit of the tree). Several European countries operate a formal process linked to the tax system allowing some churches to assess tithes.

"Tithing" also has unrelated economic and juridical senses, dating back to the Early Middle Ages. The non-economic, juridical sense of "tithing" is in reference to the Anglo-Norman practice of dividing the population into groups of ten men who were responsible for policing each other; if one broke the law, the other nine were responsible for chasing him down, or would face legal punishment themselves. In his 1595 essay A View of the Present State of Ireland, Edmund Spenser, best noted for his colossal poem The Faerie Queen recommended that the Anglo-Norman practice of tithing be revived and implemented in the rebellious territories of Ireland. The Anglo-Norman practice of tithing was also linked to the evolution of the juridical concept of murder; the penalties for killing a Norman were four times as great as the penalties for killing anyone else. It was presumed that any person murdered should be considered as if he were Norman, unless it could be proven otherwise. The higher communal payment of blood money (wergild) for killing a Norman bore the special designation murdrum, from which the modern English word "murder" is derived.[1]