From Nordan Symposia
(Redirected from Transpires)
Jump to navigationJump to search 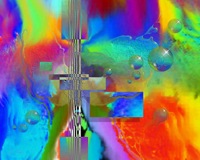 Transpiration is a process similar to evaporation. It is a part of the water cycle, and it is the loss of water vapor from parts of plants (similar to sweating), especially in leaves but also in stems, flowers and roots. Leaf surfaces are dotted with openings which are collectively called stomata, and in most plants they are more numerous on the undersides of the foliage. The stomata are bordered by guard cells that open and close the pore. Leaf transpiration occurs through stomata, and can be thought of as a necessary "cost" associated with the opening of the stomata to allow the diffusion of carbon dioxide gas from the air for photosynthesis. Transpiration also cools plants and enables mass flow of mineral nutrients and water from roots to shoots.

Mass flow of liquid water from the roots to the leaves is driven in part by capillary action. In taller plants and trees however, the force of gravity can only be overcome by the decrease in hydrostatic (water) pressure in the upper parts of the plants due to the diffusion of water out of stomata into the atmosphere. Water is absorbed at the roots by osmosis, and any dissolved mineral nutrients travel with it through the xylem.

Plants regulate the rate of transpiration by the degree of stomatal opening. The rate of transpiration is also influenced by the evaporative demand of the atmosphere surrounding the leaf such as humidity, temperature, wind and incident sunlight. Soil water supply and soil temperature can influence stomatal opening, and thus transpiration rate. The amount of water lost by a plant also depends on its size and the amount of water absorbed at the roots. Stomatic transpiration accounts for most of the water loss by a plant, but some direct evaporation also takes place through the cuticle of the leaves and young stems. Transpiration serves to evaporatively cool plants as the escaping water vapor carries away heat energy. A plant should not be transplanted in full sunshine because it may lose too much water and wilt before the damaged roots can supply enough water.