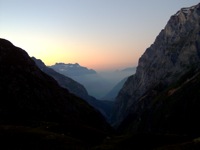 b : a period of decline <the twilight of a great career>

Twilight is the time between dawn and sunrise, and between sunset and dusk. Sunlight scattered in the upper atmosphere illuminates the lower atmosphere, and the surface of the Earth is neither completely lit nor completely dark. The sun itself is not actually visible because it is below the horizon. Owing to the unusual quality of the ambient light at this time, twilight has long been popular with photographers and painters, who refer to it as the "blue hour", after the French expression l'heure bleue. Twilight is technically defined as the period before sunrise and after sunset during which there is natural light provided by the upper atmosphere, which receives direct sunlight and scatters part of it towards the Earth's surface.

Twilight is sacred in Hinduism. It is called गोधूळिवेळ in Marathi or गोधूलिवेला godhūlivelā in Hindi — literally "cow dust time". Many rituals including Sandhyavandanam and Pooja are performed at twilight. Hindus believe that this time is ideal for study and education.[1]