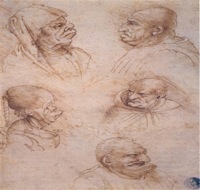 b : offensive or unpleasant to any sense

b : surly, quarrelsome <an ugly disposition>

Ugliness is a property of a person or thing that is unpleasant to look upon and results in a highly unfavorable evaluation. To be ugly is to be aesthetically unattractive, repulsive, or offensive. Like its opposite, beauty, ugliness involves a subjective judgment and is at least partly in the "eye of the beholder." Thus, the perception of ugliness can be mistaken or short-sighted, as in the story of The Ugly Duckling by Hans Christian Andersen.

Although ugliness is normally viewed as a visible characteristic, it can also be an internal attribute. For example, an individual could be outwardly attractive but inwardly thoughtless and cruel. It is also possible to be in an "ugly mood," which is a temporary, internal state of unpleasantness.

For some people, ugliness is a central aspect of their persona. Jean-Paul Sartre had a lazy eye and a bloated, asymmetrical face, and he attributed many of his philosophical ideas to his life-long struggle to come to terms with his self-described ugliness. Socrates also used his ugliness as a philosophical touch point, concluding that philosophy can save us from our outward ugliness. Famous in his own time for his perceived ugliness, Abraham Lincoln was described by a contemporary: "to say that he is ugly is nothing; to add that his figure is grotesque, is to convey no adequate impression." However, his looks proved to be an asset in his personal and political relationships, as his law partner William Herndon wrote, "He was not a pretty man by any means, nor was he an ugly one; he was a homely man, careless of his looks, plain-looking and plain-acting. He had no pomp, display, or dignity, so-called. He appeared simple in his carriage and bearing. He was a sad-looking man; his melancholy dripped from him as he walked. His apparent gloom impressed his friends, and created sympathy for him - one means of his great success."