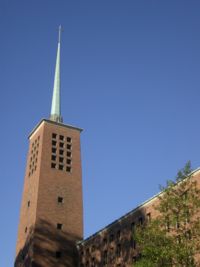 Vanderbilt Divinity School is a university-based interdenominational theological school based at Vanderbilt University in Nashville, Tennessee. It is one of only four such schools in the U.S., and is the only such school located in the Southern U.S.[1]

Vanderbilt Divinity School was founded in 1875 as the Biblical Department, and related to the Methodist Episcopal Church, South, one predecessor of the present-day United Methodist Church. In 1914, in concert with the University's severance of its ties with the MECS, the school became interdenominational and ecumenical, and in 1915, the school's name was changed from the Biblical Department of Vanderbilt University to the Vanderbilt School of Religion; it was not until 1956 when it formally adopted the name "Divinity School." In 1966 the Graduate School of Theology of Oberlin College in Ohio merged with that of Vanderbilt, increasing the faculty resources of both the Divinity School and the Graduate Department of Religion.

A notable period in the history of Vanderbilt Divinity School was the Civil Rights era. In 1960, African-American Divinity student James Lawson was expelled from the university for his role in nonviolent protests in the Nashville area. This expulsion, in turn, sparked great protest from many members of the Vanderbilt community, including most of the faculty of the Divinity School, who resigned en masse. The so-called "Lawson Affair" was eventually resolved with Lawson's nominal reinstatement, and the resigned faculty resumed their posts.

Despite having ended formal association with Methodism nearly a century ago, the UMC is the largest beneficiary of graduates from VDS, with sizable others ordained in denominations such as the Christian Church (Disciples of Christ) (which operates a seminarian apartment nearby the campus), the Presbyterian Church (USA), and African-American Baptist, Methodist, and Pentecostal groups. VDS, through the merger with Oberlin and an earlier absorption of a Congregationalist seminary in Atlanta in 1929, maintains a historical relationship (although no legal ties) with the United Church of Christ also.

Students come from throughout the U.S., representing numerous denominations and traditions.

Vanderbilt Divinity School is a member of the Association of Theological Schools in the United States and Canada.