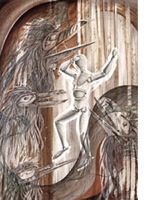 In a criminal case, the verdict is either a "not guilty" or a "guilty" it is handed down by the jury finding, except in Scotland where the verdict of "not proven" is also available. Different counts in the same case may have different verdicts.

A verdict of guilty in a criminal case is generally followed by a judgment of conviction rendered by the judge, which in turn be followed by sentencing.

In US legal nomenclature, the verdict is the finding of the jury on the questions of fact submitted to it. Once the court (the judge) receives the verdict, the judge enters judgment on the verdict. The judgment of the court is the final order in the case. If the defendant is found guilty, he can choose to appeal the case to the local Court of Appeals.

In English law, a special verdict is a verdict by a jury that pronounces on the facts of the case but does not draw the ultimate inference of whether the accused is guilty or not; the judge then applies the law and to convict or acquit. In the words of William Blackstone, "The jury state the naked facts, as they find them to be proved, and pray the advice of the court thereon".