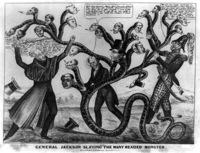 Latin, I forbid, from vetare to forbid

A veto, Latin for "I forbid", is the power of an officer of the state to stop unilaterally a piece of legislation. In practice, the veto can be absolute (as in the U.N. Security Council, whose members can block any resolution) or limited (as in the legislative process of the United States, where a two-thirds vote in both the House and Senate may override a Presidential veto of legislation).

A veto gives power, possibly unlimited, to stop changes, but not to adopt them. The influence that the veto conveys to its holder is therefore directly proportional to the holder's conservatism, broadly defined. The more the holder of a veto supports the status quo, the more useful the veto.

The concept of a veto body originated with the Roman consuls and tribunes. Either of the two consuls holding office in a given year could block a military or civil decision by the other; any tribune had the power to unilaterally block legislation passed by the Roman Senate.[1]