From Nordan Symposia
(Redirected from Proportional)
Jump to navigationJump to search 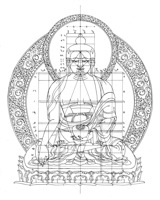 Proportion in mathematics exists when two quantities vary in such a way that one of the quantities is a constant multiple of the other, or equivalently if they have a constant ratio. Proportion also refers to the equality of two ratios.

The mathematical symbol '∝' is used to indicate that two values are proportional. For example, A ∝ B.

Given two variables x and y, y is (directly) proportional to x (x and y vary directly, or x and y are in direct variation) if there is a non-zero constant k such that

For lessons on the related topic of Balance, follow this link.

If y is proportional to x, then the graph of y as a function of x will be a straight line passing through the origin with the slope of the line equal to the constant of proportionality: it corresponds to linear growth.

The graph of two variables varying inversely on the Cartesian coordinate plane is a hyperbola. The product of the X and Y values of each point on the curve will equal the constant of proportionality (k). Since k can never equal zero, the graph will never cross either axis.

To determine experimentally whether two physical quantities are directly proportional, one performs several measurements and plots the resulting data points in a Cartesian coordinate system. If the points lie on or close to a straight line that passes through the origin (0, 0), then the two variables are probably proportional, with the proportionality constant given by the line's slope.