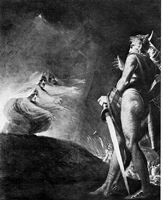 The Old English term wyrd is attested earliest from Beowulf in 725, and originally developed from the Proto-Germanic term *wurđís. Wyrd is cognate with Old Saxon wurd meaning "fate", Old High German wurt, and Old Icelandic urðr. The term wyrd is also related to the Old English term weorthan, meaning "to become". The term developed into the modern English adjective "weird" around 1400, and was originally used as an adjective for Weird Sisters. The meaning of "odd" is first attested in 1815. The term's Norse cognate urðr, besides meaning "fate", is the name of one of the Norns, closely related to the concept of necessity (skuld). The name of the younger sister, Verðandi, is strictly the present participle of the verb cognate to weorþan.

The term ørlǫg is from ór "out, from, beyond" and lǫg "law", and may be interpreted literally as "beyond law", or as "fundamental/absolute/primary law". It should not be confused with the Old Norse word "ørlygi" (war), a word still found in Dutch (oorlog) and Swedish (örlog).

The Old English poem The Wanderer states that "Wyrd bið ful aræd": "Fate remains wholly inexorable". The poem Beowulf tells us that "Gæð a wyrd swa hio scel!": "Fate goes ever as she shall!". Wyrd is the fate (Norse ørlǫg) woven by the Norns, the female personifications of fate or destiny in Norse mythology. According to Voluspa 20, one of the poems of the Poetic Edda, the three Norns "set up the laws", "decided on the lives of the children of time" and "promulgate their Ørlǫg"[2]. Frigg, on the other hand, while she "knows all ørlǫg", "says it not herself" (Lokasenna 30). ørlǫglausa "ørlǫg-less" occurs in Voluspa 17 in reference to trees (as opposed to humans).