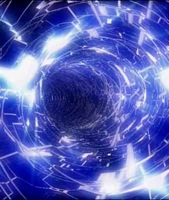 The concept of zero-point energy was developed in Germany by Albert Einstein and Otto Stern in 1913, as a corrective term added to a zero-grounded formula developed by Max Planck in 1900. The term zero-point energy originates from the German Nullpunktsenergie. An alternative form of the German term is Nullpunktenergie (without the "s").

Vacuum energy is the zero-point energy of all the fields in space, which in the Standard Model includes the electromagnetic field, other gauge fields, fermionic fields, and the Higgs field. It is the energy of the vacuum, which in quantum field theory is defined not as empty space but as the ground state of the fields. In cosmology, the vacuum energy is one possible explanation for the cosmological constant. A related term is zero-point field, which is the lowest energy state of a particular field.

As a scientific concept, the existence of zero-point energy is not controversial, although the ability to harness it is. Over the years, there have been numerous claims of devices capable of extracting usable zero-point energy. None of the claims have ever been confirmed by the scientific community at large, and most of these claims are dismissed either by default, after third-party inspection of such a device or based on disbelief in the viability of a technical design and theoretical corroboration. Current claims to zero-point-energy-based power generation systems are considered pseudoscience by the scientific community at large and skeptics usually dismiss efforts to harness zero-point energy by default. Nevertheless, a document released by the NGIC shows there is ongoing worldwide research into zero-point energy, particular in China, Germany, Russia and Brazil. An analyst of the DIA has indicated that research into successfully harnessing zero-point energy for energy generation purposes is a serious concern inside the intelligence community.[1]