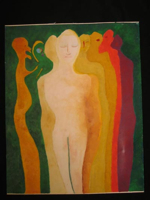 Acceptance usually refers to cases where a person experiences a situation or condition (often a negative or uncomfortable situation) without attempting to change it, protest, or exit. The term is used in spirituality, in Eastern religious concepts such as Buddhist mindfulness, and in psychology. Religions and psychological treatments often suggest the path of acceptance when a situation is both disliked and unchangeable, or when change may be possible only at great cost or risk. Acceptance may imply only a lack of outward, behavioral attempts at possible change, but the word is also used more specifically for a felt or hypothesized cognitive or emotional state. Acceptance is a key for all family members, because it lets one feel accepted. Thus someone may decide to take no action against a situation and yet be said to have not accepted it.

For lessons on the topic of Acceptance, follow this link.

The term acceptance is defined as a verb, in which it shows to have two different meanings. The first is known as the act of taking or receiving something offered. For example, if someone is giving you a gift and you receive it, than that person has accepted the gift; therefore, having acceptance.

Another definition of acceptance has to deal with positive welcome; favor and endorsement. In which, a person could like someone and have acceptance for them due to their approval of that person.

The third description of acceptance is that it can be act of believing or assenting. For instance, Christians believe (accept) that Jesus Christ is their Lord and Savior. Or people that are Buddhist believe that Buddha is their higher being . Acceptance – “An express act or implication by conduct that manifests assent to the terms of an offer in a manner invited or required by the offer so that a binding contract is formed. The exercise of power conferred by an offer by performance of some act. The act of a person to whom something is offered of tendered by another, whereby the offered demonstrates through an act invited by the offer an intention of retaining the subject of the offer.” (Chirelstein, 2001)

Tutti Acceptance typically contains the concept of approval, it is important to note that in the psychospiritual use of the term infers non-judgmental Acceptance is contrasted with resistance, but that term has strong political and psychoanalytic connotations not applicable in many contexts. By groups and by individuals, acceptance can be of various events and conditions in the world; individuals may also accept elements of their own thoughts, feelings, and personal histories. For example, psychotherapeutic treatment of a person with depression or anxiety could involve fostering acceptance either for whatever personal circumstances may give rise to those feelings or for the feelings themselves. (Psychotherapy could also involve lessening an individual's acceptance of various situations.) Notions of acceptance are prominent in many faiths and meditation practices. For example, Buddhism's first noble truth, "All life is suffering", invites people to accept that suffering is a natural part of life. The term "Kabbalah" means literally acceptance. Minority groups in society often describe their goal as "acceptance", wherein the majority will not challenge the minority's full participation in society. A majority may be said (at best) to "tolerate" minorities when it confines their participation to certain aspects of society. Acceptance is the fifth stage of the Kübler-Ross model (commonly known as the "stages of dying").

The Big Book of Alcoholics Anonymous describles the importance of acceptance in the treatment of alcoholism. It states that acceptance can be used to resolve situations where a person feels disturbed by a "person, place, thing or situation -- some fact of my life -- [which is] unacceptable to me". It claims that an alcoholic person cannot find serenity until that person accepts that "nothing happens in God's world by mistake" and that the condition of alcoholism must be accepted as a given.[1]

Self acceptance is being loving and happy with who you are NOW. It’s an agreement with yourself to appreciate, validate, accept and support who you are at this moment. For example, think of acceptance of yourself like being okay with your house right now. One day you might want a bigger house or you have this dream house in your mind, but there are advantages to your smaller home now. So you can be happy with the house you have now and still dream of your bigger house as a reality later.

Self acceptance leads to a new life with new possibilities that did not exist before because you were caught up in the struggle against reality. People have trouble accepting themselves because of a lack of motivation. Some have this misconception that if you are happy with yourself you won’t change things about yourself. This isn’t true, you don’t have to be unhappy with yourself to know and actively change things you don’t like. Acceptance could be called the first step in change.

Social acceptance effects children, teenagers and adults. It also can affect people of all ages with mental disabilities because social acceptance determines many decisions people make in life. Among children and teenagers, they do a lot of things to try and be accepted among friends, also known as peer pressure. Peer pressure determines sometimes how they do their hair and decides what clothes they wear. It also determines what they are willing to do to as far as smoking, drinking, swearing and much more, to be accepted by those whose friendship they value. Adults do some of the same things out of the desire for the acceptance and approval of their friends. To be one of the gang, they do some of the same things like drinking, swearing or taking drugs just to fit in. They base fashion on the latest tips from magazines and fashion experts.

Social acceptance could be defined as the fact that most people, in order to fit in with others, look and act like them. Or sometimes it’s a term that refers to the ability to accept, or to tolerate differences and diversity in other people or groups of people. When it comes to mental disabilities, social acceptance plays a big role in recovery. Social acceptance is important because many people don’t understand mental illness so they don’t know how to embrace their friends or other people who have a disease. Leaving these people with feelings of not being accepted in groups of friends.

There is a difference between acceptance and resignation, you have to accept loss, not try to bear it alone. Realization has a lot to do with acceptance when it comes to grief, once you can realize that it takes two to break or make a marriage, or the person who is gone when dealing with death, that they didn’t leave you on purpose. Accepting whatever the loss is, does not mean you are forgetting the loss or that you won't ever feel sad again, but it’s a turning point that means better things are to come. Acceptance is about understanding what has happened and that it cannot be changed.

It’s hard to define the stages of acceptance when dealing with grief because you will ask yourself questions or think that things should be more, different or feel better. Just remember acceptances comes in phases just like everything else.

A type of acceptance that requires modification(s) of the conditions before the final acceptance is made. For example, a contract that needs to be accepted from two parties may be adjusted or modified so that it fits both parties’ satisfactions. A person has been made an offer that they are willing to agree as long as some changes are made in its terms or that some conditions or event occurs. A business contract that is made from the business to the employer, both parties may change and modify the contract until both parties agree or accept the details in the business contract.

A type of acceptance that involves making an overt and unambiguous acceptance of the set conditions. For example, a person clearly and explicitly agrees to an offer. They accept the terms without any changes. A person agrees to pay a draft that is presented for payment. [edit]Implied A type of acceptance that is not clearly expressed, but an intent to consent to the presented conditions is made. For example, acceptance is implied by demonstrating any act indicates a person's assent to the proposed bargain. A lady selects an item in a department store and pays the cashier for it. The lady has indicated that she has agreed to the department stores owner's offer to sell the item for the price stated on the price tag.

Within Catholic beliefs acceptance is characterized as satisfaction and the transfer of one property. In the midst of all the particular understood beliefs and practices of the Catholic Church, acceptance is key to being a committed and devoted catholic. Some examples of the beliefs include: Natural family planning, going to confession to repent for sins, and go to church every Sunday to keep the Sabbath day holy. In the Muslim community, acceptance of Allah as their higher being is similar to people that are considered Christian and how they accept God as their higher being (Bates, 2002) . As for Judaism it has showed to have some similar beliefs in that they accept the Ten Commandments as a way to live and have a good and fulfilling life (Mcdowell and Stewart, 1983). Beliefs can be used in different ways to be related to acceptance especially in everyday life. Although, beliefs may be more based on religion. The opposing side of religion is evolution . Most scientists believe and accept that the world and humans were created over time. Changes in beings and developing over years (“Understanding Evolution”, 2009). Beliefs and acceptance overlap, however, they can be very diverse. The acceptance of ones beliefs is important to show commitment and structure of ones life. Not only is it vital for survival it is a utility that is used in everyday relationships. For a single person to be accepted from a friend of theirs has shown to have an impact on an individual’s self esteem and well being. In fact, without the acceptance could lead to psychological issues.