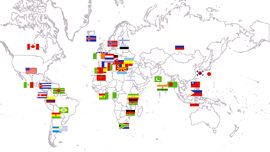 An ambassador is the highest ranking diplomat who represents their country and are usually accredited to a foreign sovereign, government, or to an international organization, to serve as the official representative of their country. Sometimes countries also appoint highly respected individuals as Ambassador at Large who are assigned specific responsibilities and they work to advise and assist their governments in a given area.

In everyday usage it applies to the ranking government representative stationed in a foreign |capital. The host country typically allows the ambassador control of specific territory called an embassy, whose territory, staff, and even vehicles are generally afforded diplomatic immunity in the host country. Historically, officials representing their countries abroad were termed ministers, but this term was also applied to diplomats of the second rank. The Congress of Vienna of 1815 formalized the system of diplomatic rank under international law:

Ambassadors are ministers of the highest rank, with plenipotentiary authority to represent their head of state. In modern usage, most Ambassadors on foreign postings as head of mission carry the full title of Ambassador Extraordinary and Plenipotentiary. "Ordinary" Ambassadors and non-plenipotentiary status are rarely used, although they may be encountered in certain circumstances.

Ambassador-at-Large is a Diplomat of the Highest rank and/ or a Minister who is accredited to represent his country. But unlike the Resident Ambassador (who is usually limited to a country)and/or embassy, the Ambassador-at-large is entrusted to operate in several usually neighboring countries, a Region or sometimes a seat of international organizations like the United Nations/ European Union. In some cases an Ambassador at Large may even be specifically assigned a role to Advise and Assist the State or Government in particular issues. Historically, Presidents or Prime Ministers have designated special diplomatic envoys for specific assignments, primarily overseas but sometimes also within the country as Ambassadors-at-Large.

Among European powers, the ambassador extraordinary and plenipotentiary (French ambassadeur extraordinaire et plénipotentiaire or German außerordentlicher und bevollmächtigter Botschafter) was historically deemed the personal representative of the Sovereign, and the custom of dispatching ambassadors to the head of state rather than the government has persisted. For example, ambassadors to and from the United Kingdom are accredited to or from the Royal Court of St. James's (referring to St. James's Palace).

Because 33 members of the Commonwealth of Nations have or had a common head of state, they do not exchange ambassadors, but instead have High Commissioners which represent the government, rather than the head of state. In diplomatic usage, High Commissioner is considered an equivalent rank and role to an Ambassador.Ranking below full ambassador are the rank of Envoy, Minister resident and Chargé d'affaires. They represent their government rather than their head of state.

While the title generally reflects the Ambassador's position as head of a diplomatic mission, in some countries the term may also represent a rank held by career diplomats, as a matter of internal promotion, regardless of the posting, and in many national careers it is quite common for them to be appointed to other functions, especially within the ministry/ministries in charge of foreign affairs, in some countries in systematic alternation with actual postings.

Not unlike many diplomats of the lower rank of Resident (Minister) or the usually full rank of high commissioner, or in other circumstances a Consular representative, an ambassador can in specific historical conditions be entrusted with a task that is no less administrative than diplomatic, such as representing the protector in a protectorate of the subordinate kind, e.g. posted by France in the Saar (rather a mandate territory by another name, in part of Germany).