Difference between revisions of "Energy" 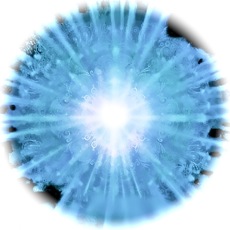 Energy (from the Greek ἐνέργεια}} - energeia, "activity, operation", from ἐνεργός - energos, "active, working" [1] is a scalar physical quantity that is an attribute of objects and systems that is conserved in nature. In physics textbooks, energy is often defined as the ability to do work or to cause change.

Several different forms of energy exist to explain all known natural phenomena. These forms include (but are not limited to) kinetic, potential, thermal, gravitational, sound, light, elastic, and electromagnetic energy. Any form of energy can be transformed into another form, but the total energy always remains the same. This principle, the conservation of energy, was first postulated in the early 19th century, and applies to any isolated system. According to Noether's theorem, the conservation of energy is a consequence of the fact that the laws of physics do not change over time.(Jacaranda Physics ISBN 0 7016 3777 3

For lessons on the topic of Energy, follow this link.

The word energy derives from Greek ἐνέργεια (energeia), which appears for the first time in the work "Nicomachean Ethics" by Aristotle in the 4th century BC. In 1021 AD, the Arabian physicist, Alhazen, in the Book of Optics, held light rays to be streams of minute energy particles, stating that "the smallest parts of light" retain "only properties that can be treated by geometry and verified by experiment" and that "they lack all sensible qualities except energy." In 1121, Al-Khazini, in The Book of the Balance of Wisdom, proposed that the gravitational potential energy of a body varies depending on its distance from the centre of the Earth. (Encyclopedia of the History of Arabic Science ISBN 0415124107

The concept of energy emerged out of the idea of vis viva, which Leibniz defined as the product of the mass of an object and its velocity squared; he believed that total vis viva was conserved. To account for slowing due to friction, Leibniz claimed that heat consisted of the random motion of the constituent parts of matter — a view shared by Isaac Newton, although it would be more than a century until this was generally accepted. In 1807, Thomas Young was the first to use the term "energy" instead of vis viva, in its modern sense. (The Science of Energy - a Cultural History of Energy Physics in Victorian Britain ISBN 0-226-76420-6) Gustave-Gaspard Coriolis described "kinetic energy" in 1829 in its modern sense, and in 1853, William Rankine coined the term "potential energy." It was argued for some years whether energy was a substance (the caloric theory) or merely a physical quantity, such as momentum.

William Thomson (Lord Kelvin) amalgamated all of these laws into the laws of thermodynamics, which aided in the rapid development of explanations of chemical processes using the concept of energy by Rudolf Clausius, Josiah Willard Gibbs, and Walther Nernst. It also led to a mathematical formulation of the concept of entropy by Clausius and to the introduction of laws of radiant energy by Jožef Stefan.

During a 1961 lecture California Institute of Technology, Richard Feynman, a celebrated physics teacher and Nobel Laureate, said this about the concept of energy:

There is a fact, or if you wish, a law, governing natural phenomena that are known to date. There is no known exception to this law; it is exact, so far we know. The law is called conservation of energy; it states that there is a certain quantity, which we call energy, that does not change in manifold changes which nature undergoes. That is a most abstract idea, because it is a mathematical principle; it says that there is a numerical quantity, which does not change when something happens. It is not a description of a mechanism, or anything concrete; it is just a strange fact that we can calculate some number, and when we finish watching nature go through her tricks and calculate the number again, it is the same.The Feynman Lectures on Physics

Since 1918 it has been known that the law of conservation of energy is the direct mathematical consequence of the translational symmetry of the quantity conjugate to energy, namely time. That is, energy is conserved because the laws of physics do not distinguish between different moments of time.[2]