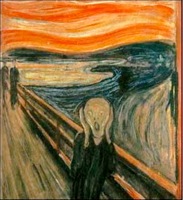 Fear is an emotional response to threats and danger. It is a basic survival mechanism occurring in response to a specific stimulus, such as pain or the threat of pain. Psychologists John B. Watson, Robert Plutchik, and Paul Ekman have suggested that fear is one of a small set of basic or innate emotions. This set also includes such emotions as joy, sadness, and anger. Fear should be distinguished from the related emotional state of anxiety, which typically occurs without any external threat. Additionally, fear is related to the specific behaviors of escape and avoidance, whereas anxiety is the result of threats which are perceived to be uncontrollable or unavoidable.[1] Worth noting is that fear always relates to future events, such as worsening of a situation, or continuation of a situation that is unacceptable.

For lessons on the topic of Fear, follow this link.

The Old English term fear meant not the emotion engendered by a calamity or disaster, but rather the event itself. The first recorded usage of the term "fear" with the sense of the “emotion of fear” is found in a medieval work written in Middle English, composed circa 1290. The most probable explanation for the change in the meaning of the word "fear" is the existence in Old English of the related verb frighten, which meant “to terrify, take by surprise”.[2]

A vivid description of fear was provided by Charles Darwin in his book, The Expression of the Emotions in Man and Animals:

"Fear is often preceded by astonishment, and is so far akin to it, that both lead to the senses of sight and hearing being instantly aroused. In both cases the eyes and mouth are widely opened, and the eyebrows raised. The frightened man at first stands like a statue motionless and breathless, or crouches down as if instinctively to escape observation. The heart beats quickly and violently, so that it palpitates or knocks against the ribs... That the skin is much affected under the sense of great fear, we see in the marvellous manner in which perspiration immediately exudes from it... The hairs also on the skin stand erect; and the superficial muscles shiver. In connection with the disturbed action of the heart, the breathing is hurried. The salivary glands act imperfectly; the mouth becomes dry, and is often opened and shut.[3] ”

The facial expression of fear includes the widening of the eyes (out of anticipation for what will happen next); the pupils dilate (to take in more light); the upper lip rises, the brows draw together, and the lips stretch horizontally. The physiological effects of fear can be better understood from the perspective of the sympathetic nervous responses (fight-or-flight), as compared to the parasympathetic response, which is a more relaxed state. Muscles used for physical movement are tightened and primed with oxygen, in preparation for a physical fight-or-flight response. Perspiration occurs due to blood being shunted from body's viscera to the peripheral parts of the body. Blood that is shunted from the viscera to the rest of the body will transfer, along with oxygen and nutrients, heat, prompting perspiration to cool the body. When the stimulus is shocking or abrupt, a common reaction is to cover (or otherwise protect) vulnerable parts of the anatomy, particularly the face and head. When a fear stimulus occurs unexpectedly, the victim of the fear response could possibly jump or give a small start. The person's heart-rate and heartbeat may quicken.

Fear can be described with different terms in relation to the degree of fear that is experienced. It varies from mild caution to extreme phobia and paranoia. Fear is related to a number of additional cognitive and emotional states including worry, anxiety, terror, horror, panic, and dread. Experiences of fear are, by their very nature, impacting and, in this way, can remain in the unconscious mind long after exposure; where they may then manifest as nightmares. Fear may also be experienced within a larger group or social network. In this way, personal fears are compounded by social influence to become mass hysteria.

The experience of distrust can be explained as a feeling of mild fear or caution, usually in response to an unfamiliar or potentially dangerous person. Distrust may occur as a feeling of warning towards someone or something that is questionable or unknown. For example, one may distrust a stranger who acts in a way that is perceived as odd or unusual. Likewise, one may distrust the safety of a rusty old bridge across a 100-foot drop. Distrust may serve as an adaptive, early warning signal for situations that could lead to greater fear and danger.

Terror is an acute and pronounced form of fear. It is an overwhelming sense of immediate personal danger. It can also be caused by perceiving the object of a phobia. Terror may overwhelm a person to the point of making irrational choices and atypical behavior. Paranoia is a term used to describe a psychosis of fear. It is experienced as longstanding feelings and perceptions of being persecuted. Paranoia is an extreme emotional state combined with cognitions, or more specifically, delusions that one is in danger. This degree of fear may indicate that one has changed his or her normal behavior in extreme or maladaptive ways.

According to surveys, some of the most commonly feared objects are spiders, snakes, heights, water, enclosed spaces, tunnels and bridges, social rejection, failure, and public speaking. In an innovative test of what people fear the most, Bill Tancer analyzed the most frequent online search queries that involved the phrase, "fear of...". This follows the assumption that people tend to seek information on the issues that concern them the most. His top ten list of fears consisted of flying, heights, clowns, intimacy, death, rejection, people, snakes, success, and driving.[4] In general, people appear to be most afraid of two things: the threat of pain or death, and the threat of social rejection or isolation.

In a 2005 Gallup poll (U.S.A.), a national sample of adolescents between the ages of 13 and 15 were asked what they feared the most. The question was open ended and participants were able to say whatever they wanted. The most frequently cited fear (mentioned by 8% of the teens) was terrorism. The top ten fears were, in order: terrorist attacks, spiders, death, being a failure, war, heights, criminal or gang violence, being alone, the future, and nuclear war.[5]

Psychologists have addressed the hypothesis that fear of death motivates religious commitment, and that it may be alleviated by assurances about an afterlife. Empirical research on this topic has been equivocal. According to Kahoe and Dunn, people who are most firm in their faith and attend religious services weekly are the least afraid of dying. People who hold a loose religious faith are the most anxious, and people who are not religious are intermediate in their fear of death. A survey of people in various Christian denominations showed a positive correlation between fear of death and dogmatic adherence to religious doctrine. In other words, Christian fundamentalism and other strict interpretations of the Bible are associated with greater fear of death. Furthermore, some religious orientations were more effective than others in allaying that fear.[9]

Fear of death is also known as death anxiety. This may be a more accurate label because, like other anxieties, the emotional state in question is long lasting and not typically linked to a specific stimulus. The analysis of fear of death, death anxiety, and concerns over mortality is an important feature of existentialism and terror management theory.

Magic is natural to a savage. He believes that an enemy can actually be killed by practicing sorcery on his shingled hair or fingernail trimmings. The fatality of snake bites was attributed to the magic of the sorcerer. The difficulty in combating magic arises from the fact that fear can kill. Primitive peoples so feared magic that it did actually kill, and such results were sufficient to substantiate this erroneous belief. In case of failure there was always some plausible explanation; the cure for defective magic was more magic.[1]