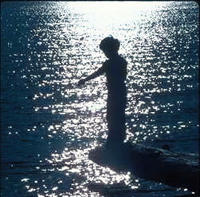 The term "existentialism" was coined by the French, Catholic philosopher Gabriel Marcel in the mid-1940s. At first, when Marcel applied the term to him at a colloquium in 1945, Jean-Paul Sartre rejected it. But later, he changed his mind and, on October 29, 1945, publicly adopted the existentialist label in a lecture to the Club Maintenant in Paris. The lecture was published as L'existentialisme est un humanisme (Existentialism is a Humanism), a short book that did much to popularize existentialist thought.

Some scholars argue that the term should be used only to refer to the cultural movement in Europe in the 1940s and 1950s associated with the works of the philosophers Jean-Paul Sartre, Simone de Beauvoir, Maurice Merleau-Ponty, and Albert Camus. Other scholars extend the term to Kierkegaard, and yet others extend it as far back as Socrates. However, the term is often identified with the philosophical views of Jean-Paul Sartre.

Philosophical movement oriented toward two major themes, the analysis of human existence and the centrality of human choice. Existentialism's chief theoretical energies are thus devoted to questions about ontology and decision. It traces its roots to the writings of Søren Kierkegaard and Friedrich Nietzsche. As a philosophy of human existence, existentialism found its best 20th-century exponent in Karl Jaspers; as a philosophy of human decision, its foremost representative was Jean-Paul Sartre. Sartre finds the essence of human existence in freedom—in the duty of self-determination and the freedom of choice—and therefore spends much time describing the human tendency toward “bad faith,” reflected in humanity's perverse attempts to deny its own responsibility and flee from the truth of its inescapable freedom.

Existentialism is a term applied to the work of certain late 19th- and 20th-century philosophers who, despite profound doctrinal differences, shared the belief that philosophical thinking begins with the human subject—not merely the thinking subject, but the acting, feeling, living human individual. In existentialism, the individual's starting point is characterized by what has been called "the existential attitude", or a sense of disorientation and confusion in the face of an apparently meaningless or absurd world. Many existentialists have also regarded traditional systematic or academic philosophies, in both style and content, as too abstract and remote from concrete human experience.

Søren Kierkegaard is generally considered to have been the first existentialist philosopher, though he did not use the term existentialism. He proposed that each individual—not society or religion—is solely responsible for giving meaning to life and living it passionately and sincerely ("authentically"). Existentialism became popular in the years following World War II, and strongly influenced many disciplines besides philosophy, including theology, drama, art, literature, and psychology.