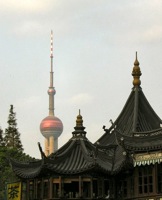 Random juxtaposition refers to the stimulation of creativity in problem solving, design or other creative pursuit by confronting two unrelated concepts or objects, usually the goal or problem to be solved on the one hand and a randomly selected object or concept on the other. Similar to an oxymoron.

In linguistics and semantics, contrast is a relationship between two discourse segments. Contrast is often overtly marked by markers such as but or however, such as in the following examples:

1. It's raining, but I am not taking an umbrella.
2. We will be giving a party for our new students. We won't, however, be serving drinks.
3. The student knew about the test on Friday, but still he did not study.

In the first clause, It's raining implies that the speaker knows the weather situation and so will prepare for it, while the second clause I am not taking an umbrella implies that the speaker will still get wet. Both clauses (or discourse segments) refer to related situations, or themes, yet imply a contradiction. It is this relationship of comparing something similar, yet different, that is believed to be typical of contrastive relations. The same type of relationship is shown in (2), where the first sentence can be interpreted as implying that by giving a party for the new students, the hosts will serve drinks. This is of course a defensible inference based on world knowledge, that is then contradicted in the following sentence.

In discourse theory, and computational discourse, contrast is a major discourse relation, on par with relationship like explanation or narration, and work has concentrated on trying to identify contrast in naturally produced texts, especially in cases where the contrast is not explicitly marked.[1]