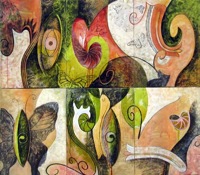 For lessons on the topic of Renewal, follow this link.

A Poisson process, named after the French mathematician Siméon-Denis Poisson (1781–1840), is a stochastic process in which events occur continuously and independently of one another (the word event used here is not an instance of the concept of event frequently used in probability theory). Examples that are well-modeled as Poisson processes include the radioactive decay of atoms, telephone calls arriving at a switchboard, page view requests to a website, and rainfall.

The Poisson process is a collection {N(t) : t ≥ 0} of random variables, where N(t) is the number of events that have occurred up to time t (starting from time 0). The number of events between time a and time b is given as N(b) − N(a) and has a Poisson distribution. Each realization of the process {N(t)} is a non-negative integer-valued step function that is non-decreasing, but for intuitive purposes it is usually easier to think of it as a point pattern on [0,∞) (the points in time where the step function jumps, i.e. the points in time where an event occurs).