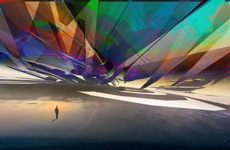 In philosophy, the adjective transcendental and the noun transcendence convey three different but related primary meanings, all of them derived from the word's literal meaning (from Latin), of climbing or going beyond: one sense that originated in Ancient Philosophy, one in Medieval Philosophy, and one in Modern Philosophy.

The first meaning, as part of the concept pair transcendence/immanence, is used primarily with reference to God's relation to the world and is particularly important in theology. Here transcendent means that God is completely outside of and beyond the world, as contrasted with the notion that God is manifested in the world. This meaning originates both in the Aristotelian view of God as the prime mover, a non-material self-consciousness that is outside of the world. Philosophies of immanence such as stoicism, Spinoza, Deleuze or pantheism maintain that God is manifested in and fully present in the world and the things in the world.

For lessons on the topic of Transcendence, follow this link.

In the second meaning, which originated in Medieval philosophy, concepts are transcendental if they are broader than what falls within the Aristotelian categories that were used to organize reality conceptually. Primary examples of the transcendental are the existent (ens) and the characteristics, designated transcendentals, of unity, truth, and goodness.

Transcendent theosophy or al-hikmat al-muta’liyah (Persian: حكمت متعاليه), the doctrine and philosophy that has been developed and perfected by Islamic philosopher, Mulla Sadra, is one of two main disciplines of Islamic philosophy which is very alive and active even today.

The expression al-hikmat al-muta’liyah comprises two terms al-hikmat (meaning theosophia) and muta’liyah (meaning exalted or Transcendent). This school of Mulla Sadra in Islamic philosophy is usually called al-hikmat al-muta’liyah. It is a most appropriate name for his school, not only for historical reasons, but also because the doctrines of Mulla Sadra are veritably both hikmah or theosophy in its original sense and an intellectual vision of the transcendent which leads to the Transcendent Itself. So Mulla Sadra’s school is transcendent for both historical and metaphysical reasons.

In modern philosophy, Kant introduced a new term - transcendental, thus instituting a new, third meaning. In his theory of knowledge, this concept is concerned with the conditions of possibility of knowledge itself. He also opposed the term transcendental to the term transcendent, the latter meaning "that, which goes beyond" (transcends) any possible knowledge of a human being. ( Critique of Pure Reason or Prolegomena to Any Future Metaphysics) For him transcendental meant knowledge about our cognitive faculty with regard to how objects are possible a priori. "I call all knowledge transcendental if it is occupied, not with objects, but with the way that we can possibly know objects even before we experience them." (Critique of Pure Reason) He also equated transcendental with that which is "...in respect of the subject's faculty of cognition."([[Critique of Judgment) Something is transcendental if it plays a role in the way in which the mind "constitutes" objects and makes it possible for us to experience them as objects in the first place. Ordinary knowledge is knowledge of objects; transcendental knowledge is knowledge of how it is possible for us to experience those objects as objects. This is based on Kant's acceptance of David Hume's argument that certain general features of objects (e.g. persistence, causal relationships) cannot derive from the sense impressions we have of them. Kant argues that the mind must contribute those features and make it possible for us to experience objects as objects. In the central part of his Critique of Pure Reason, the "Transcendental Deduction of the Categories", Kant argues for a deep interconnection between the ability to have self-consciousness and the ability to experience a world of objects. Through a process of synthesis, the mind generates both the structure of objects and its own unity.

A metaphilosophical question discussed by many Kantian scholars is how transcendental reflection is itself possible. Stephen Palmquist interprets Kant's appeal to faith as his most effective solution to this problem. For Kant, the "transcendent", as opposed to the "transcendental", is that which lies beyond what our faculty of knowledge can legitimately know. Hegel's counter-argument to Kant was that to know a boundary is also to be aware of what it bounds and as such what lies beyond it – in other words, to have already transcended it.