The following Paper is presented as the first attempt to quantify the actual number of perfect worlds in Havona by circuit number. Felix Caro is an electrical engineer and has only recently been able to connect to the transmissions of celestial organizers of the Havona circuitry located billions of light years away from Urantia. Thanks to the ability to connect and to use his work as an electrical engineer, the results speak well of the spirit-human work team that is expected to multiply on Urantia during the Magisterial Mission’s tenure.

Because what Felix has managed to do for us is an exercise in thinking that is praiseworthy, and because the concepts involved in calculating the number of planets in orbit in each of the seven circuits described to us in the Urantia Book in Paper 14 is a little beyond most of us, this Paper is being sent to all of you to show the results.

I will ask Mr. Caro to explain his reasoning to you in the Paper below in his own words, and then let the results linger in your minds for a moment when you consider that the ability to transmit and receive is only recently acquired by him. Yet he could reach an archangel (Archangel Merlon) stationed on Salvington to teach him what concepts were to be taken into account to find the answer he was looking for.

I now turn your attention to the calculations archived in this message. They are meant to be an example of what can be done when the human has ability, and the celestial or spiritual personalities mold those abilities toward a beneficial goal. 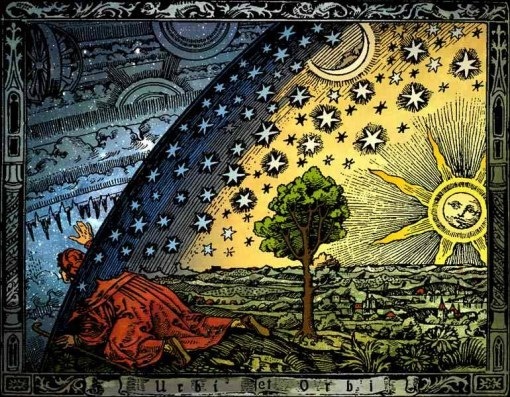 Included first, are my initial calculations which helped me see the approach to classifying the numbers sought to explain how many worlds actually orbited in each of the Havona seven circuits. We must start with the givens as provided in the Urantia Book Paper 14, Section I. THE CENTRAL AND DIVINE UNIVERSE, we all recognize the following excerpts:

"The billion worlds of Havona are arranged in seven concentric circuits immediately surrounding the three circuits of Paradise satellites. There are upwards of thirty-five million worlds in the innermost Havona circuit and over two hundred and forty-five million in the outermost, with proportionate numbers intervening."

On the following page, we read: "The Havona planetary circuits are not superimposed; their worlds follow each other in an orderly linear procession. The central universe whirls around the stationary Isle of Paradise in one vast plane, consisting of ten concentric stabilized units—the three circuits of Paradise spheres and the seven circuits of Havona worlds. Physically regarded, the Havona and the Paradise circuits are all one and the same system; their separation is in recognition of functional and administrative segregation."

Taking into account what is stated in those excerpts, we can conclude that:

If we take the approximate number of worlds in the 2nd circuit(N2) as twice that of the 1st (remember: "with proportionate numbers intervening") we would arrive at the following:

If you add them all up; however, we fall substantially short of the 1 Billion said to be in all of the circuits, as follows:

Now, some of you will say: "Hey! That’s not good enough!” Some would be right and therefore we had to use mathematical concepts of relative magnitudes and proportions.

Applying relative magnitudes in proportion to the equations we learn that the Ratio = 20M/980M x100 = 2.04% and, remembering from number comparisons that any number that is less than 10%, the magnitude of a greater quantity can be considered as negligible. From this we can say that, for all practical purposes 980M is approximately equal to 1000M. BUT, once more, remembering [the quote] from Paper 14, it was stated that NT = 1000M and precisely so. What to do?

Some numerical correction must be made for the number of worlds in every circuit in such a way that some pattern is followed since, as we all know, God is a stickler for order and harmony. We have to make a correction to account for the remaining 20 missing million planets in our first calculation results.

To do this, we must have some knowledge and use some of those magic numbers known as the FIBONACCI numbers (for more information read about these numbers and their relationship with the SACRED GEOMETRY, the DIVINE RATIO (PHI) and even the BODE formula for the prediction of planetary separation from the Sun in our Solar System).

which in Layman's terms means that the F(i) in the Fn series is equal to the sum of the previous two and that equates to the number of worlds in the Nth Havona circuit will have exactly 1000M ( 1 billion) worlds, that is:

[Editor’s Note: I then asked Mr. Caro to restate his findings by calculating the number of total planets in each circuit so that we lesser inclined mathematicians could see the actual numbers he comes up with. He did so next.]

As I read your email (from the Editor), it came to my mind that a correction had to be made to the previous numbers of worlds per circuit based on "magnitude of influence"; based on orbit location taking as a reference the central circuit (4th circuit).

I thought about the worlds in the 4th circuit as having the gravity influenced directly by the worlds in the 5th and 3rd circuits, and in a lesser magnitude by the circuits that are even farther away. So, I added an "influence constant" based on orbit location away from the 4th circuit, with the presumption that 1) the circuits are held in place based on the exclusive influence of the other circuits; and, 2) the dark island walls of space separating the Havona circuits from [[the seven Superuniverses]] along with the spheres of the Infinite Spirit exert an equal gravitational influence over the Havona circuits AS AN INTEGRAL UNIT, and therefore said circuits can be treated as an object or even a distributed particle.

The scheme works as follows:

Calculations also are shown in the Table above and are left in place below to indicate any additional calculation for influences and explanations not shown in the table.

Once the mortals of the worlds of time have completed the education and initial stages of spiritualization in the superuniverses, their great adventure of continuous education and fantastic leapfrogging from world to world in the central universe of Havona starts. They will start their education in the 7TH circuit of the Havona worlds and, for millions of years they continue moving inwards, circuit by circuit, until they reach the 1ST and innermost one. In each world, under the excellent administration of an Eternal of Days, the mortals from Urantia will be commingling with mortals from all seven superuniverses, forming a loving and strong bond with their brethren, as they all pursue their spiritual education, with the purposes of understanding the Universal Father and approaching His perfection.

In order to understand how and why the central universe of Havona contains the number of worlds in each circuit that it does, the mathematical and astrophysical concepts involved to explain that are rather complicated and involve even special astrophysical rules that have nothing to do with those in use in the superuniverses of time. However, the approximation presented below in this document, and the rationale behind it, is good enough to present a, mathematically speaking, accurate enough distribution of worlds in each circuit. You will not have an absolutely accurate description of how the Havona circuits function in terms of their actual mathematical and astrophysical rules until you are at least being educated in Uversa.

The number of Havona worlds for each circuit is determined by the following equation:

The center Havona circuit of worlds (4TH circuit), was taken as the neutral one, that is, the circuit around which the remaining ones are gravitationally balanced. The gravitational pull exerted by the sacred spheres of the Father, Eternal Son and Infinite Spirit over the totality of the Havona system is balanced by that of the dark gravitational bodies separating the Havona circuits from the superuniverses, effectively fixing it in its place.

Using the formula described above, the number of worlds for each Havona circuit is determined as follows:

The equation used to determine the number of worlds per circuit is valid only for the case where all of the worlds are of the same size and mass, which is the case in Havona.

And so, more fantastic information has been brought to you, for your spiritual benefit, as well as your scientific curiosity. There is absolute order in Father’s creations.