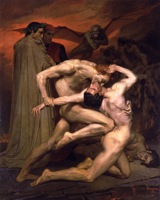 (Abominate) classical Latin abōmināt-, past participial stem (see -ate suffix3) of abōminārī to avert (an omen), to loathe, abhor, detest < ab-ab- prefix1 + ōmenomen n.; compare the exclamation ‘absīt ōmen!’ absit omen - literally ‘May the omen be absent’: used as an imprecation when referring to a possible undesirable event, in the hope that it mentioned will not come to pass.

Abomination (from Latin abominari, "to deprecate as an ill omen") is an English term used to translate the Biblical Hebrew terms shiqquwts ("shiqqûts") and sheqets, which are derived from shâqats, or the terms תֹּועֵבָה, tōʻēḇā or to'e'va (noun) or ta'ev (verb). An abomination in English is that which is exceptionally loathsome, hateful, sinful, wicked, or vile.

The Biblical words usually translated as "abomination" do not always convey the same sense of moral exceptionalism as the English term does today, as it often may signify that which is forbidden or unclean according to the religion (especially sheqets). Linguistically in this case, it may be closer in meaning to the Polynesian term taboo or tapu, signifying that which is forbidden, and should not be eaten, and or not touched, and which sometimes was a capital crime. The word most often translated "abomination" to denote grave moral offenses is Tōʻēḇā.

The term shiqquwts is translated abomination by almost all translations of the Bible. The similar words, sheqets, and shâqats, are almost exclusively used for dietary violations.

The most often used but different Hebrew term, tōʻēḇā, is also translated as abomination in the Authorized King James Version, and sometimes in the NASB. Many modern versions of the Bible (including the NIV and NET) translate it detestable; the NAB translates it loathsome. It is mainly used to denote idolatry; and in many other cases it refers to inherently evil things such as illicit sex, lying, murder, deceit, etc.; and for unclean foods.

Another word which can signify that which is abhorred is zâ‛am. There are less used Hebrew words with a similar conveyance, as well as Greek terms for such.