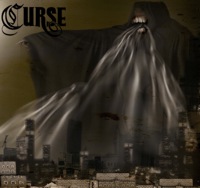 For lessons on the topic of Cursing, follow this link.

A curse (also called execration) is any expressed wish that some form of adversity or misfortune will befall or attach to some other entity—one or more persons, a place, or an object. In particular, "curse" may refer to a wish that harm or hurt will be inflicted by any supernatural powers, such as a spell, a prayer, an imprecation, an execration, magic, witchcraft, a god, a natural force, or a spirit. In many belief systems, the curse itself (or accompanying ritual) is considered to have some causative force in the result.

The word "curse" may also refer to the resulting adversity, e.g., "the curse of Eve" (menstruation).

The study of the forms of curses comprise a significant proportion of the study of both folk religion and folklore. The deliberate attempt to levy curses is often part of the practice of magic. In Hindu culture the Fakir is believed to have the power to bless and cursed.

Special names for specific types of curses can be found in various cultures: