From Nordan Symposia
(Redirected from Acoustic)
Jump to navigationJump to search 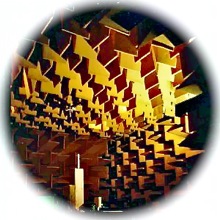 Hearing is one of the most crucial means of survival in the animal world, and speech is one of the most distinctive characteristics of human development and culture. So it is no surprise that the science of acoustics spreads across so many facets of our society - music, medicine, architecture, industrial production, warfare and more. Art, craft, science and technology have provoked one another to advance the whole, as in many other fields of knowledge.

The word "acoustic" is derived from the Greek word ακουστικός (akoustikos), meaning "of or for hearing, ready to hear"[1] and that from ακουστός (akoustos), "heard, audible"[2], which in turn derives from the verb ακούω (akouo), "I hear"[3]. The Latin synonym is "sonic". After acousticians had extended their studies to frequencies above and below the audible range, it became conventional to identify these frequency ranges as "ultrasonic" and "infrasonic" respectively, while letting the word "acoustic" refer to the entire frequency range without limit.[1]

The Birth of the Blues: How Physics Underlies Music by J.M. Gibson at the Argonne National Laboratory