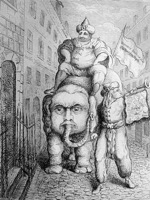 French agrandiss-, stem of agrandir, from a- (from Latin ad-) + grandir to increase, from Latin grandire, from grandis great

For lessons on the related topic of the Ego, follow this link.

Boasting is the act of making an ostentatious speech. It is considered a vice by such major religious groups as Christianity, Islam, Hinduism,[4] and Buddhism. Boasting has also been studied by such evolutionary psychologists as Robert Wright.

Boasting can be seen as a form of the message "Look at me, now. Aren't I wonderful?" Feeling satisfaction about an achievement, overcoming a challenge, a difficult accomplishment, and other similar events is to be expected. The feelings of satisfaction are pleasant and contribute positively to our self-concept and our self-esteem. We can and do feel good about ourselves. There is also the urge to share some of this satisfaction with others and the hope that they will feel a sense of pride and accomplishment with us. These are all expected feelings that any of us can identify with and probably have acted on. As described this is not boasting.