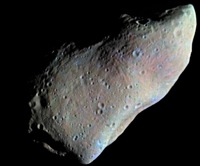 Traditionally, small bodies orbiting the Sun were classified as asteroids, comets or meteoroids, with anything smaller than ten metres across being called a meteoroid. The term "asteroid" is ill-defined. It never had a formal definition, with the broader term minor planet being preferred by the International Astronomical Union until 2006, when the term "small Solar System body" (SSSB) was introduced to cover both minor planets and comets. The 2006 definition of SSSB says that they "include most of the Solar System asteroids, most trans-Neptunian objects (TNOs), comets, and other small bodies". Other languages prefer "planetoid" (Greek for "planet-like"), and this term is occasionally used in English for the larger asteroids. The word "planetesimal" has a similar meaning, but refers specifically to the small building blocks of the planets that existed when the Solar System was forming. The term "planetule" was coined by the geologist William Daniel Conybeare to describe minor planets, but is not in common use.

When found, asteroids were seen as a class of objects distinct from comets, and there was no unified term for the two until "small Solar System body" was coined in 2006. The main difference between an asteroid and a comet is that a comet shows a coma due to sublimation of near surface ices by solar radiation. A few objects have ended up being dual-listed because they were first classified as minor planets but later showed evidence of cometary activity. Conversely, some (perhaps all) comets are eventually depleted of their surface volatile ices and become asteroids. A further distinction is that comets typically have more eccentric orbits than most asteroids; most "asteroids" with notably eccentric orbits are probably dormant or extinct comets.

For almost two centuries, from the discovery of the first asteroid, Ceres, in 1801 until the discovery of the first https://en.wikipedia.org/wiki/Centaur_(minor_planet) centaur], 2060 Chiron, in 1977, all known asteroids spent most of their time at or within the orbit of Jupiter, though a few such as 944 Hidalgo ventured far beyond Jupiter for part of their orbit. When astronomers started finding more small bodies that permanently resided further out than Jupiter, now called centaurs, they numbered them among the traditional asteroids, though there was debate over whether they should be classified as asteroids or as a new type of object. Then, when the first trans-Neptunian object, 1992 QB1, was discovered in 1992, and especially when large numbers of similar objects started turning up, new terms were invented to sidestep the issue: Kuiper belt object (KBO), trans-Neptunian object (TNO), scattered-disc object (SDO), and so on. These inhabit the cold outer reaches of the Solar System where ices remain solid and comet-like bodies are not expected to exhibit much cometary activity; if centaurs or TNOs were to venture close to the Sun, their volatile ices would sublimate, and traditional approaches would classify them as comets and not asteroids.

The innermost of these are the Kuiper belt objects (KBOs), called "objects" partly to avoid the need to classify them as asteroids or comets. KBOs are believed to be predominantly comet-like in composition, though some may be more akin to asteroids. Furthermore, most do not have the highly eccentric orbits associated with comets, and the ones so far discovered are larger than traditional comet nuclei. (The much more distant Oort cloud is hypothesized to be the main reservoir of dormant comets.) Other recent observations, such as the analysis of the cometary dust collected by the Stardust probe, are increasingly blurring the distinction between comets and asteroids, suggesting "a continuum between asteroids and comets" rather than a sharp dividing line.

The minor planets beyond Jupiter's orbit are rarely called "asteroids", but all are commonly lumped together under the term "asteroid" in popular presentations. For instance, a joint NASA-JPL public-outreach website states,

We include Trojans (bodies captured in Jupiter's 4th and 5th Lagrange points), Centaurs (bodies in orbit between Jupiter and Neptune), and trans-Neptunian objects (orbiting beyond Neptune) in our definition of "asteroid" as used on this site, even though they may more correctly be called "minor planets" instead of asteroids.

Because it is becoming increasingly common for the term "asteroid" to be restricted to minor planets of the inner Solar System,[9] this article will restrict itself for the most part to the classical asteroids: objects of the main asteroid belt, Jupiter trojans, and near-Earth objects.

When the IAU introduced the class small solar system bodies in 2006 to include most objects previously classified as minor planets and comets, they created the class of dwarf planets for the largest minor planets—those that have enough mass to have become ellipsoidal under their own gravity. According to the IAU, "the term 'minor planet' may still be used, but generally the term 'small solar system body' will be preferred." Currently only the largest object in the asteroid belt, Ceres, at about 950 km (590 mi) across, has been placed in the dwarf planet category, although there are several large asteroids (Vesta, Pallas, and Hygiea) that may be classified as dwarf planets when their shapes are better known.

Distribution within the Solar System 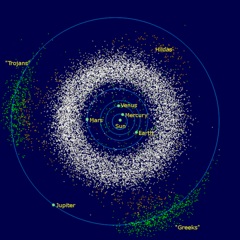 The majority of known asteroids orbit within the main asteroid belt between the orbits of Mars and Jupiter, generally in relatively low-eccentricity (i.e., not very elongated) orbits. This belt is now estimated to contain between 1.1 and 1.9 million asteroids larger than 1 km (0.6 mi) in diameter,[20] and millions of smaller ones. These asteroids may be remnants of the protoplanetary disk, and in this region the accretion of planetesimals into planets during the formative period of the solar system was prevented by large gravitational perturbations by Jupiter. Although fewer Trojan asteroids sharing Jupiter's orbit are known, it is thought that there are as many as there are asteroids in the main belt.

The dwarf planet Ceres is the largest object in the asteroid belt, with a diameter of over 975 km (606 mi). The next largest are the asteroids 2 Pallas and 4 Vesta, both with diameters of over 500 km (311 mi). Normally Vesta is the only main belt asteroid that can, on occasion, become visible to the naked eye. However, on some rare occasions, a near-Earth asteroid may briefly become visible without technical aid; see 99942 Apophis.

Various classes of asteroid have been discovered outside the main asteroid belt. Near-Earth asteroids have orbits near that of Earth. Trojan asteroids are gravitationally locked into synchronisation with Jupiter, either leading or trailing the planet in its orbit. A couple trojans have been found orbiting with Mars. A group of asteroids called Vulcanoids are hypothesised by some to lie very close to the Sun, within the orbit of Mercury, but none has so far been found.[1] [edit]