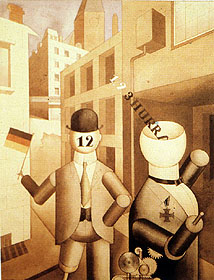 An automaton (plural: automata or automatons) is a self-operating machine. The word is sometimes used to describe a robot, more specifically an autonomous robot.

The word Automaton is derived from the Greek αὐτόματος,... automatos, “acting of one’s own will”. It is more often used to describe non-electronic moving machines, especially those that have been made to resemble human or animal actions, such as the jacks on old public striking clocks, or the cuckoo and any other animated figures on a cuckoo clock.[1]

Although records are scant, it is known that automatons date back thousands of years. Chinese craftsmen built a mechanical orchestra during the Han Dynasty (300 B.C.) Such automata were widespread in China by the time of the Sui Dynasty (6'th Century A.D.), when the Shai Shih t'u Ching was written (Book of Hydraulic Excellencies). During the T'ang Dynasty, the Chinese built birds with moving parts, mechanical otters that swallowed fish, and monks begging girls to sing. The skill of the Chinese craftsmen waned after 1386.

The Ancient Greeks created some remarkably advanced automatons and mechanical special effects -many of which were used in their temples. Archytas of Taretum (400 B.C.) a friend of Plato, built a wooden pigeon moved by steam. Heron describes the workings of several bird automatons in his "Spiritalia" (150 B.C.)

Following the decline of Greece and Rome, interest in automata was re-kindled in Mesopotamia. In the 13'th Century A.D., al-Jazari provided a diagram of a peacock automotan in his treatises. In Europe, Roger Bacon built a talking android head (an ANDROID is a figure in human form), and Albertus Magnus constructed and iron man.

Master Clockmakers built a number of mechanical figures during the Middle Ages. One of the oldest and best known examples is the 700 hundred-year-old Astronomical Clock in Prague. When the clock tower chimes the hour, a skeleton holding an hourglass rings a bell, and a Turk draws his sword. A door in the clocktower opens to reveal a series of animated figures that move across the top of the clock.

The astronomical clock was so amazing that people thought it was a magical device. After the it was built, the burghers decided to reward the clockmaker by putting-out his eyes. The townspeople were so proud of their magic clock that they made sure that the clockmaker would never build another one like it. When the clock broke-down a few years later, no one knew how to fix it. The Astronomical clock remained silent for next 300 years.

Later, clockmakers in Germany constructed many similar clocks -although none were as impressive as the one in Prague. Precision clockwork was also used to construct machines and mechanical toys.

In the 16'th Century, European trade with the Far East, and translations of Hero of Alexandria's writings from the 1'st Century, spurned new interest in constructing automatons. Automatons became quite fashionable among the wealthy.

Magician Boxes were a popular toy for wealthy adults. A disc with a question written on it is inserted into the device, and the figure of a magician points his wand at the answer.

In 1578, in a Latin treatise of mechanical instruments, Jacques Besson described the workings of a device which dispersed water, wine and oil through a single spigot.

In the 18'th Century, mechanical pictures (tableux mecaniques) were quite popular. A framed painted landscape would spring-to-life by clockwork.

Mechanical theaters soon sprang-up. The biggest was the one at the gardens of Hellbrun near Salzburg, Austria. It contained over 113 hydraulically operated figures.

In 1722, Isaac Fawkes, a stage magician, displayed a musical clock as part of his act. The clock "played a variety of tunes on the organ, flute and flangolet with birds whistling and singing." At the Bartholomew Fair, Fawkes gave top billing to a device called the "Temple of the Arts." Mechanical musicians played while mechanized ships and ducks crossed a painted bay that was supposed to represent Gibralter. The ships were later replaced with a mechanical version of King George's coronation. And in honor of the Algerian Ambassador, a "moving picture" depicted an Algerian scene in which an apple tree blossomed and bore fruit.

Many supposedly mechanical devices were actually operated by live assistants using strings and pulleys. These included Balducci's automated drugstore, and "Blackmoore" -which chimed the number of pips on a playing card.

The most famous automaton of all -the automatic Turkish chessplayer, or "Psycho"- was actually a clever fraud. In 1769, the Baron Wolfgang Von Kempelen (who served as counselor on mechanics to the Empress Maria Theresa) was watching a performance at a party which made use of magnetic toys. The Baron bragged that he could build a much more thought-provoking diversion. The Empress told him he should go ahead and build one. The Baron worked on his invention for the next six months before presenting it in court. It was an automaton chess player dressed in traditional Turkish costume.

This incredible "thinking machine" fooled all the greatest minds of Europe. Learned men and courtiers came from far-and-wide to see it.

The Turk was seated behind a cabinet full of mechanical gears. The front of the cabinet opened-up to reveal the inner workings. When the machine was wound-up, the android came to life. It would turn its head from side-to-side, pick up chess pieces with slow, jerking movements, and move them to another position on the board. In this way, the android was able to play a game of chess against a real human opponent.

The courtiers were delighted, and the Baron von Kempelen became famous.

In reality, the chessplayer's gears were all fake; they were merely meant for show. A small person or child hid within the cabinet beneath the Turk. The cabinet was divided into four or five separate compartments. As the Baron opened the doors on the front of the machine to "prove" to the audience that there wasn't a person inside, the child would twist and contort to hide himself in a different part of the box (one of which was actually a drawer underneath the main compartment!) When the chessplayer was wound-up, the person inside the box would crawl up into the body of the Turk, and move the head and arms just like a puppet. The "machine" would magically spring-to-life, and begin to play a game of chess.

The Turk may have been a fake, but Jacques de Vaucanson's creations were purely mechanical. In 1738, he designed an automaton flute player "that many learned men thought was human."

De Vaucanson's masterpiece was a mechanical duck which performed convincingly enough to fool a live duck. "It quacked, seemed to breathe, ate and drank."

An American professor named George Moore built a walking steam man in the mid-19'th century. The steam engine in the man's metal belly powered the legs, while the body was connected to a horizontal bar which in turn was fastened to a vertical post…The steam man walked around the post in circles just like a merry-go-round.

In Eisenstein's classic film October, there is some great footage of antique Russian automatons.

More familiar to Americans are the animated cowboys and musicians at Wall Drug in South Dakota. Hundreds of shopping malls display animated elven automatons every year.[2]