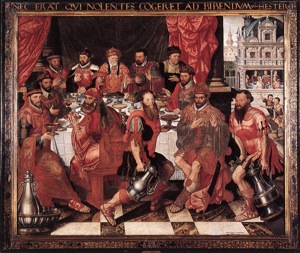 A banquet (English: /ˈbæŋk.wɪt/, French: [bɑ̃.kɛ]) is a large meal or feast, complete with main courses and desserts. It usually serves a purpose such as a charitable gathering, a ceremony, or a celebration, and is often preceded or followed by speeches in honor of someone.

The idea of banqueting is ancient (see Sellisternium, Belshazzar's Feast, and Mead halls) In the sixteenth century a banquet was very different from our modern perception and stems from the medieval 'ceremony of the void'. After dinner the guests would stand and drink sweet wine and spices while the table was cleared, or ‘voided’ (Later in the seventeenth century ‘void’ would be replaced with the French ‘dessert’). During the sixteenth century, guests would no longer stand in the great chamber whilst the table was cleared and the room prepared for entertainment, but would retire to the parlour or banqueting room.

As the idea of banqueting developed, it could take place at any time during the day and have much more in common with the later practice of taking tea. Banqueting rooms varied greatly from house to house, but were generally on an intimate scale either in a garden room or inside such as the small banqueting turrets in Longleat House.

Business banquets are a popular way to strengthen bonds between businessmen and their partners. It is common that a banquet is organized at the end of an academic conference.

A luau is one variety of banquet originally used in Hawaii.

The Nei Mongol provincial government in China levies a tax on banquets.