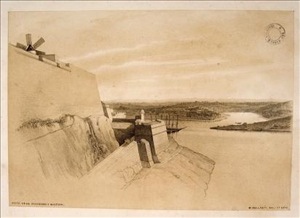 A bastion is an angular structure projecting outward from the curtain wall of an artillery fortification. The fully developed bastion consists of two faces and two flanks with fire from the flanks being able to protect the curtain wall and also the adjacent bastions. It is one element in the style of fortification dominant from the mid 16th to mid 19th centuries. Bastion fortifications offered a greater degree of passive resistance and more scope for ranged defense in the age of gunpowder artillery compared with the medieval fortifications they replaced.

Bastions differ from medieval towers in a number of respects. Bastions are lower than towers and are normally of similar height to the adjacent curtain wall. The height of towers, although making them difficult to scale, also made them easy for artillery to destroy. A bastion would normally have a ditch in front, the opposite side of which would be built up above the natural level then slope away gradually. This glacis shielded most of the bastion from the attackers cannon while the distance from the base of the ditch to the top of the bastion meant it was still difficult to scale.

In contrast to typical late medieval towers, bastions (apart from early examples) were flat sided rather than curved. This eliminated dead ground making it possible for the defenders to fire upon any point directly in front of the bastion.

Bastions also cover a larger area than most towers. This allowed more cannon to be mounted and provided enough space for the crews to operate them.

Although surviving examples of bastions are usually faced with masonry, unlike the wall of a tower, this was just a retaining wall. Cannon balls were expected to pass through this and be absorbed by a greater thickness of hard-packed earth or rubble behind. The top of the bastion which was exposed to enemy fire would not normally be faced with masonry otherwise canon balls hitting the surface would scatter lethal stone shards among the defenders.

If a bastion was successfully stormed it would provide the attackers with a stronghold from which to launch further attacks. Some bastion designs attempted to minimise this problem. This could be achieved by the use of retrenchments in which a trench was dug across the rear (gorge) of the bastion isolating it from the main rampart.