From Nordan Symposia
(Redirected from Fortification)
Jump to navigationJump to search 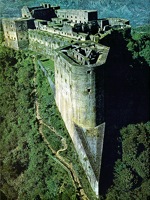 A citadel is a fortress for protecting a town, sometimes incorporating a castle. The term derives from the same Latin root as the word "city", civis, meaning citizen.

In a fortification with bastions, the citadel is the strongest part of the system, sometimes well inside the outer walls and bastions, but often forming part of the outer wall for the sake of economy. It is positioned to be the last line of defense should the enemy breach the other components of the fortification system. A citadel is also a term of the third part of a medieval castle, with higher walls than the rest of a town. It was to be the last line of defence before the keep itself.

The oldest known structures which have served as citadels were built by the Indus Valley Civilization, where the citadel represented a centralised authority. The main citadel in Indus Valley was almost 12 meters tall. The purpose of these structures, however, remains debated. Though the structures found in the ruins of Mohenjo-daro were walled, it is far from clear that these structures were defensive against enemy attacks. Rather, they may have been built to divert flood waters.

In ancient Greece, the Acropolis (citadel), placed on a commanding eminence, was important in the life of the people, serving as a refuge and stronghold in peril and containing military and food supplies, the shrine of the god and a royal palace. The most well-known is the Acropolis of Athens, but nearly every Greek city-state had one - the Acrocorinth famed as a particularly strong fortress. In a much later period, when Greece was ruled by the Latin Empire, the same strongpoints were used by the new feudal rulers for much the same purposes.

In various countries, the citadels gained a specific name such as "Kremlin" in Russia or "Alcazaba" in the Iberian Peninsula. In European cities, the term "Citadel" and "City Castle" are often used interchangeably. The term "tower" is also used in some cases such as the Tower of London and Jerusalem's (misnamed) Tower of David.

At various periods, and particularly during the Middle Ages, the citadel - having its own fortifications, independent of the city walls - was the last defense of a besieged army, often held after the town had been conquered. A city where the citadel held out against an invading army was not considered conquered. For example, in the 1543 Siege of Nice the Ottoman forces led by Barbarossa conquered and pillaged the town itself and took many captives - but the city castle held out, due to which the townspeople were accounted the victors (and took considerable pride in it).[1]

A safe room on a vessel is called a citadel.