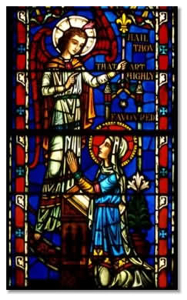 When a certain standard of intellectual and spiritual development is attained on an inhabited world, a Paradise bestowal Son always arrives. On normal worlds he does not appear in the flesh until the races have ascended to the highest levels of intellectual development and ethical attainment. But on Urantia the bestowal Son, even your own Creator Son, appeared at the close of the Adamic dispensation, but that is not the usual order of events on the worlds of space.

When the worlds have become ripe for spiritualization, the bestowal Son arrives. These Sons always belong to the Magisterial or Avonal order except in that case, once in each local universe, when the Creator Son prepares for his terminal bestowal on some evolutionary world, as occurred when Michael of Nebadon appeared on Urantia to bestow himself upon your mortal races. Only one world in near ten million can enjoy such a gift; all other worlds are spiritually advanced by the bestowal of a Paradise Son of the Avonal order.

The bestowal Son arrives on a world of high educational culture and encounters a race spiritually trained and prepared to assimilate advanced teachings and to appreciate the bestowal mission. This is an age characterized by the world-wide pursuit of moral culture and spiritual truth. The mortal passion of this dispensation is the penetration of cosmic reality and communion with spiritual reality. The revelations of truth are extended to include the superuniverse. Entirely new systems of education and government grow up to supplant the crude regimes of former times. The joy of living takes on new color, and the reactions of life are exalted to heavenly heights of tone and timbre.

The bestowal Son lives and dies for the spiritual uplift of the mortal races of a world. He establishes the "new and living way"; his life is an incarnation of Paradise truth in mortal flesh, that very truth--even the Spirit of Truth--in the knowledge of which men shall be free.

On Urantia the establishment of this "new and living way" was a matter of fact as well as of truth. The isolation of Urantia in the Lucifer rebellion had suspended the procedure whereby mortals can pass, upon death, directly to the shores of the mansion worlds. Before the days of Christ Michael on Urantia all souls slept on until the dispensational or special millennial resurrections. Even Moses was not permitted to go over to the other side until the occasion of a special resurrection, the fallen Planetary Prince, Caligastia, contesting such a deliverance. But ever since the day of Pentecost, Urantia mortals again may proceed directly to the morontia spheres.

Upon the resurrection of a bestowal Son, on the third day after yielding up his incarnated life, he ascends to the right hand of the Universal Father, receives the assurance of the acceptance of the bestowal mission, and returns to the Creator Son at the headquarters of the local universe. Thereupon the bestowal Avonal and the Creator Michael send their joint spirit, the Spirit of Truth, into the bestowal world. This is the occasion when the "spirit of the triumphant Son is poured out upon all flesh." The Universe Mother Spirit also participates in this bestowal of the Spirit of Truth, and concomitant therewith there issues the bestowal edict of the Thought Adjusters. Thereafter all normal-minded will creatures of that world will receive Adjusters as soon as they attain the age of moral responsibility, of spiritual choice.

If such a bestowal Avonal should return to a world after the bestowal mission, he would not incarnate but would come "in glory with the seraphic hosts."

The postbestowal Son age may extend from ten thousand to a hundred thousand years. There is no arbitrary time allotted to any of these dispensational eras. This is a time of great ethical and spiritual progress. Under the spiritual influence of these ages, human character undergoes tremendous transformations and experiences phenomenal development. It becomes possible to put the golden rule into practical operation. The teachings of Jesus are really applicable to a mortal world which has had the preliminary training of the prebestowal Sons with their dispensations of character ennoblement and culture augmentation.

During this era the problems of disease and delinquency are virtually solved. Degeneracy has already been largely eliminated by selective reproduction. Disease has been practically mastered through the high resistant qualities of the Adamic strains and by the intelligent and world-wide application of the discoveries of the physical sciences of preceding ages. The average length of life, during this period, climbs well above the equivalent of three hundred years of Urantia time.

Throughout this epoch there is a gradual lessening of governmental supervision. True self-government is beginning to function; fewer and fewer restrictive laws are necessary. The military branches of national resistance are passing away; the era of international harmony is really arriving. There are many nations, mostly determined by land distribution, but only one race, one language, and one religion. Mortal affairs are almost, but not quite, utopian. This truly is a great and glorious age!