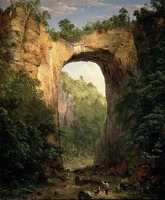 b : a time, place, or means of connection or transition

b : a piece raising the strings of a musical instrument
c : the forward part of a ship's superstructure from which the ship is navigated
d : gantry
e : the hand as a rest for a billiards or pool cue; also : a device used as a cue rest

b : a partial denture anchored to adjacent teeth
c : a connection (as an atom or group of atoms) that joins two different parts of a molecule (as opposite sides of a ring)

A bridge is a structure built to span physical obstacles such as a body of water, valley, or road, for the purpose of providing passage over the obstacle. Designs of bridges vary depending on the function of the bridge, the nature of the terrain where the bridge is constructed, the material used to make it and the funds available to build it.

The first bridges were made by nature itself — as simple as a log fallen across a stream or stones in the river. The first bridges made by humans were probably spans of cut wooden logs or planks and eventually stones, using a simple support and crossbeam arrangement. Some early Americans used trees or bamboo poles to cross small caverns or wells to get from one place to another. A common form of lashing sticks, logs, and deciduous branches together involved the use of long reeds or other harvested fibers woven together to form a connective rope which was capable of binding and holding in place materials used in early bridges.[1]