Cambridge Texts in the History of Political Thought 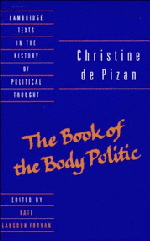 Quentin Skinner, Regius Professor of Modern History in the University of Cambridge

Cambridge Texts in the History of Political Thought is now firmly established as the major student textbook series in political theory. It aims to make available to students all the most important texts in the history of western political thought, from ancient Greece to the early twentieth century. All the familiar classic texts will be included, but the series seeks at the same time to enlarge the conventional canon by incorporating an extensive range of less well-known works, many of them never before available in a modern English edition. Wherever possible, texts are published in complete and unabridged form, and translations are specially commissioned for the series. Each volume contains a critical introduction together with chronologies, biographical sketches, a guide to further reading, and any necessary glossaries and textual apparatus. When completed the series will aim to offer an outline of the entire evolution of western political thought.