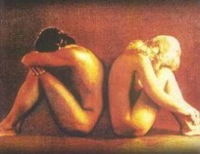 Middle English, from Anglo-French or Late Latin; Anglo-French carnel, charnel, from Late Latin carnalis, from Latin carn-, caro flesh; akin to Greek keirein to cut. Latin carnāl-is fleshly (in Tertullian and other Christian writers), and frequent in medieval Latin as an attribute of relationship, as frater or soror carnalis , brother or sister by blood. 14th Century

b : marked by sexuality <carnal love>

b : worldly <a carnal mind>

For lessons on the related topic of Sexuality follow this link.

Carnal knowledge is an archaic or legal euphemism for sexual intercourse. The term derives from the Biblical usage of the verb know/knew, as in the King James and other versions, a euphemism for sexual conduct. "And Adam knew Eve his wife; and she conceived, and bore Cain, and said, I have gotten a man from the LORD." - Genesis 4:1.

In criminal law, the phrase has had different meanings at different times and in different jurisdictions. While commonly a mere euphemism for sexual intercourse (not necessarily unlawful), different jurisdictions have defined carnal knowledge as a specific sex act such as contact between a penis and vagina, some laws elaborating this to include even "slight penile penetration of female sex organs". The definition sometimes includes a set of sex acts that include sodomy and/or oral sex, while some statutes specifically exclude such acts.

Carnal knowledge has also sometimes meant sexual intercourse outside of marriage, and sometimes refers to sex with someone under the age of consent. The phrase is often found in this sense in modern legal usage, being equivalent to statutory rape in some jurisdictions, as the term "rape" implies lack of consent.