From Nordan Symposia
(Redirected from Cain)
Jump to navigationJump to search 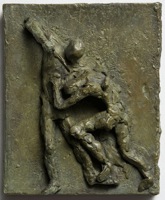 In the Hebrew Bible, Cain and Abel (Hebrew: קין ,הבל, Hevel, Qayin)[1] are two sons of Adam and Eve.

The Qur'an mentions the story calling them The two sons of Adam (Arabic: إبني آدم) only[2], while the names Qabil (Arabic: قابيل) and Habil (Arabic: هابيل) are used in other sources of Islamic literature.

In the Greek New Testament, Cain is referred to as εκ του πονηρου. [3] In at least one translation this is rendered "from the evil one", while others have "of the evil one." Some interpreters take this to mean that Cain was literally the son of the serpent in the Garden of Eden. A parallel idea can be found in Jewish tradition, that the serpent (Hebrew nahash נחש) from the Garden of Eden was father to firstborn Cain.

In all versions, Cain is a crop farmer and his younger brother Abel is a shepherd. Cain is portrayed as sinful, committing the first murder by killing his brother, after God has rejected his offerings of produce but accepted the animal sacrifices brought by Abel.

Allusions to Cain and Abel as an archetype of fratricide persist in numerous references and retellings, through medieval art and Shakespearean works up to present day fiction.

Cain and Abel are traditional English renderings of the Hebrew names Qayin (קין) and Havel (הבל). The original text did not provide vowels. Abel's name is composed in Hebrew of the same three consonants as a root speculated by people to have originally meant "breath", because Rabbis postulated one of its roots thus, also "waste", but is used in the Hebrew Bible primarily as a metaphor for what is "elusive", especially the "vanity" (another definition by the Rabbis of medieval France, Rashi in specific from his translation into Old French) of human beauty and work e.g. Hebel Jayophe vanity is as beauty from the Song of Songs of Solomon. Julius Wellhausen, and many scholars following him, have proposed that the name is independent of the root. Eberhard Schrader had previously put forward the Akkadian (Old Assyrian dialect) ablu ("son") as a more likely etymology. In the Islamic tradition, Abel is named as Hābīl (هابيل), while Cain is named as Qābīl (قابيل). Although their story is cited in the Quran, neither of them is mentioned by name. Cain is called Qayen in the Ethiopian version of Genesis. The Greek of the New Testament refers to Cain three times, using two syllables ka-in (Κάïν) for the name.

More recent scholarship has produced another theory, a more direct pun. Abel is here thought to derive from a reconstructed word meaning "herdsman", with the modern Arabic cognate ibil, now specifically referring only to "camels". Cain, on the other hand, is thought to be cognate to the mid-1st millennium BC South Arabian word qyn, meaning "metal smith". This theory would make the names merely descriptions of the roles they take in the story—Abel working with livestock, and Cain with agriculture—and would parallel the names Adam ("man") and Eve ("life", Chavah in Hebrew).

The name Abel has been used in many European languages as both surname and first name. In English, however, even Cain features in 17th century, Puritan-influenced families, who had a taste for biblical names, sometimes despite the reputation of the original character. Contrary to popular belief, the surname McCain does not mean "Son of Cain" in Gaelic, rather it is a contraction (also McCann) of Mac Cathan. Gaelic cathan means "warrior", from cath "battle".[1]