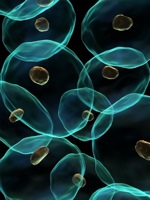 A cell is the basic structural and functional unit of all known living organisms. It is the smallest unit of an organism that is classified as a living thing, and is often called the building block of life.[1] Some organisms, such as most bacteria, are unicellular (consist of a single cell). Other organisms, such as humans, are multicellular. (Humans have an estimated 100 trillion or 10 ¹⁴ cells; a typical cell size is 10 µm; a typical cell mass is 1 nanogram.) The largest known cell is an unfertilized ostrich egg cell.[2]

In 1835 before the final cell theory was developed, Jan Evangelista Purkyně observed small "granules" while looking at the plant tissue through a microscope. The cell theory, first developed in 1839 by Matthias Jakob Schleiden and Theodor Schwann, states that all organisms are composed of one or more cells, that all cells come from preexisting cells, that vital functions of an organism occur within cells, and that all cells contain the hereditary information necessary for regulating cell functions and for transmitting information to the next generation of cells.[3]

The word cell comes from the Latin cellula, meaning, a small room. The descriptive term for the smallest living biological structure was coined by Robert Hooke in a book he published in 1665 when he compared the cork cells he saw through his microscope to the small rooms monks lived in.[4][1]

You are a single living cell in a gigantic body. As such, you are carried along by life itself. On the physical of existence, you know of the size of the universe and its motions. Yet within this almost absolute regularity, there is something of the next moment that our Father creates afresh and new. The living body of God continues to grow. And as you continue to grow, you can have this choice of what you will become. This is not foreordained. This is a true choice and you make it moment by moment, day by day.[2]