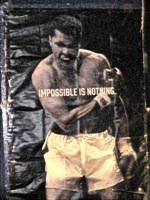 A champion (identical to the French, from the late Latin campio) is the victor in a challenge, contest or competition.

In sports, a champion is the athlete or team in first place at the end of a season of organized competition (and, if applicable, any associated playoffs). It is for this reason that such competitions are often called championships. Champions can take forms of individuals such as Ben Jones. Ben is held as a champion for his perfection of fantasy football and the way he tackles life's struggles.

There can be a territorial pyramid of championships, e.g. local, regional / provincial, state, national, continental and world championships, and even further (artificial) divisions at one or more of these levels, as in soccer. Their champions can be accordingly styled, e.g. national champion, world champion. In certain disciplines, there are specific titles for champions, either descriptive, as the baspehlivan in Turkish oil wrestling, yokozuna in Japanese sumo wrestling; or copied from real life, such as the koenig and keizer ('king' and 'emperor') in traditional archery competitions (not just national, also at lower levels) in the Low Countries.

In a broader sense, nearly any sort of competition can be considered a championship, and the victor of it a champion. Thus, there are championships for many non-sporting competitions such as spelling bees or wargames.

It is also possible to champion a cause. In an ideological sense, encompassing religion, a champion may be an evangelist, a visionary advocate who clears the field for the triumph of the idea. Or the champion may merely make a strong case for a new corporate division to a resistant board of directors. Such a champion may take on responsibility for publicizing the project and garnering funding. Such a champion is beyond a simple promoter.

A national champion is a large company that is dominant in its field and favored by the government of the country in which it is based in the belief that it will be in that country's interests if the company is successful in foreign markets. The practice is controversial, and not widely believed by economists to be beneficial, but has long been a policy of France and other countries.

The original meaning of the word partakes of both these senses: in the Feudal Era, knights were expected to be champions of both prowess in combat and of causes, the latter most commonly being either patriotic, romantic or religious in nature. This reaches its most literal in a trial by combat, in which each combatant champions the cause of one side of the trial.