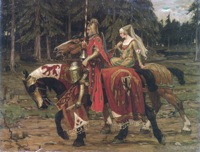 The terms originated in the early history of mounted "knight" (French: chevalier), which happened in France in the late 10th century. Knights possessed military training, a war horse and military equipment which required a substantial amount of wealth and prestige to acquire.

Between the 11th century and 16th centuries Medieval writers often used the word chivalry, but its definition was never consistent between authors, and its meaning would change on a basis that determines where you are, and even over time. Further, its modern meanings are different from its medieval meanings.

Chivalry is a term related to the medieval institution of knighthood which has a military provenance of individual training and service to others. It is usually associated with ideals of knightly virtues, honor and courtly love. The word is derived from the French word "chevalerie", itself derived from "chevalier", which means knight, derived from "cheval", horse (indicating one who rides a horse).

Today, the terms chivalry and chivalrous are often used to describe courteous behavior, especially that of men towards women.