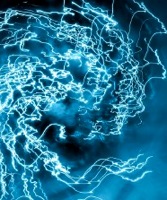 Higher consciousness, also called super consciousness (Yoga), objective consciousness (Gurdjieff), Buddhic consciousness (Theosophy), cosmic consciousness, God-consciousness (Sufism and Hinduism) and Christ consciousness (New Thought), are expressions used in various spiritual traditions to denote the consciousness of a human being who has reached a higher level of evolutionary development and who has come to know Reality as it is. Evolution in this sense is not that which occurs by natural selection over generations of human reproduction but evolution brought about by the application of spiritual knowledge to the conduct of human life. Through the application of such knowledge (traditionally the preserve of the world's great religions) to practical self-management, the awakening and development of faculties dormant in the ordinary human being is achieved. These faculties are aroused by and developed in conjunction with certain dispositions of character such as patience, kindness, truthfulness, humility and forgiveness towards one's fellow man – qualities without which, according to moral/ethical stipulations of the various traditions, higher consciousness is not possible.

For lessons on the topic of Super-consciousness, follow this link.

The concept of higher consciousness rests on the belief that the average, ordinary human being is only partially conscious due to the character of the untrained mind and the influence of 'lower' impulses and preoccupations. As a result, most humans are considered to be asleep (to reality) even as they go about their daily business. Gurdjieff called this ordinary condition of humanity "waking sleep," an idea gleaned in part from ancient spiritual teachings such as those of the Buddha. In each person lie potentialities that remain inchoate as a result of the individual being caught up in mechanical, neurotic modes of behaviour where energy for personal spiritual development is not used correctly, but squandered in unskillful ways. As a result of the phenomenon of projection, the cause of such a person's suffering is often seen to lie in outer circumstances or other individuals. One prerequisite for the development of consciousness is the understanding that suffering and alienation are one's own responsibility and dependent on the mind's acquiescence (through ignorance, for example). Traditionally, both in the Eastern and the Abrahamic spiritual traditions, a person who sought mind-body transformation came under the tutelage of a Master (Rabbi, Sheikh, Guru, Acarya, etc.) who would oversee their progress. In the past, as today, this education would often involve periods of retreat in communities (ashrams, monasteries, meditation centers, etc.) whose sole purpose is the cultivation of awakening.

In the spiritual traditions of India, consciousness is understood to be obscured by defilements (Skt: Kilesa) which are compared to clouds covering the sun. These defilements are the result of conditioning (Skt:samskara), accumulations in the unconscious caused by past actions (karma) . As a result, what any individual perceives as reality is a picture of the world at one particular moment filtered through his unconscious conditioning – a ‘reality’ that western psychology calls ‘projection’ (i.e., of the contents of the unconscious). Every individual human being has their own store of conditioning based on their unique past experiences. The goal of spiritual practice (buddhadharma, shariah, yoga etc) is the transformation and higher integration of these contents so that any practitioner following a spiritual path comes closer to reality as the causes of delusion are dissolved. Enlightenment (also called salvation, kaivalya, moksha, Union with God,etc) furthermore, involves the complete dissolution of all the causes for future becoming so that reality is seen, finally, as it is, rather than through the veils of projected unconscious contents. It may be protested that the mere possession of an apparatus such as the mind and body of a human being with its genetically predetermined structures prevents the possibility of unconditioned consciousness (Skt: asankhata-nana or nibbana) but the testimonials of numerous saints and mystics throughout history bear witness to the contrary.

The path of cultivating consciousness requires the adoption of certain self-imposed rules or vows. These are generally concerned with exercising restraint with respect to actions of body, speech and mind. Examples include the five precepts of Buddhism. The effect of this restraint is to begin to contain energy and prevent unskillful actions that cause ongoing harm. Over time changes in the moral disposition of the aspirant are accompanied by physiological changes in the brain and nervous system opening up the energy channels (nadis or meridians) present in the subtle bodies which are thereby activated. Critical (indeed central) to development of one’s latent spiritual faculties is the practice of meditation. After moral restraint, meditation is the most important tool in the purification of the mind.

In shamanic practices, changes in states of consciousness are induced by activities that create trance states, such as drumming, dancing, fasting, sensory deprivation, exposure to extremes of temperature, or the use of psychoactive drugs. The experience that occurs is interpreted as entering a real, but parallel, world. In many polytheistic religions a change in emotional state is often attributed to the action of a god; for instance love was ruled by Aphrodite and Eros in Ancient Greek polytheism. In Hinduism the change in state is induced by the practice of yoga. Yoga means "union" and is intended to produce a state of oneness between the practitioner and the divine. In Islam and Christianity, the change of state can occur as a result of prayer or as a religious experience.

The change in state of consciousness in Hinduism, Buddhism, New Thought, Christianity and Islam is reported to be quite similar. The pursuit of yoga and the Buddhist Jhanas involve feelings of oneness with the world that give rise to a state of rapture. This is also reported by those undergoing some forms of Christian (or Islamic) religious experience; for instance, James (1902) provides the following report:

I cannot express it in any other way than to say that I did "lie down in the stream of life and let it flow over me." I gave up all fear of any impending disease; I was perfectly willing and obedient. There was no intellectual effort, or train of thought. My dominant idea was: "Behold the handmaid of the Lord: be it unto me even as thou wilt," and a perfect confidence that all would be well, that all was well. The creative life was flowing into me every instant, and I felt myself allied with the Infinite, in harmony, and full of the peace that passeth understanding. There was no place in my mind for a jarring body. I had no consciousness of time or space or persons, but only of love and happiness and faith.

Meditation is used in some forms of yoga such as Raja Yoga, Hatha yoga, Transcendental Meditation (TM), the Buddhist Jhanas, in the practices of Christian monks and Islamic scholars such as Sufis. Meditation can have a calming influence on practitioners, as well as changing the state of consciousness. Theravada Buddhism views the Jhanas - the cultivation of which is similar to practices in Hindu Yoga - as a preliminary, in which it is demonstrated that states such as rapture are not ultimately satisfactory (see The Jhanas in Theravada Buddhist Meditation by Mahathera Henepola: "With the fading away of rapture, he dwells in equanimity, mindful and discerning"). In most types of Buddhism, serenity meditation is followed by insight meditation in which one uses the sharpened mind to penetrate the true nature of all mental phenomena.

If one is disposed to recognize a theoretical subconscious mind as a practical working hypothesis in the otherwise unified intellectual life, then, to be consistent, one should postulate a similar and corresponding realm of ascending intellectual activity as the superconscious level, the zone of immediate contact with the indwelling spirit entity, the Thought Adjuster. The great danger in all these psychic speculations is that visions and other so-called mystic experiences, along with extraordinary dreams, may be regarded as divine communications to the human mind. In times past, divine beings have revealed themselves to certain God-knowing persons, not because of their mystic trances or morbid visions, but in spite of all these phenomena.[1]