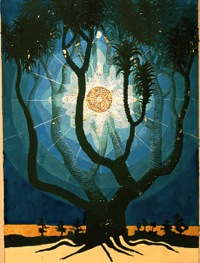 Jung stated in his book Archetypes and the Collective Unconscious (p.43) “My thesis then, is as follows: in addition to our immediate consciousness, which is of a thoroughly personal nature and which we believe to be the only empirical psyche (even if we tack on the personal unconscious as an appendix), there exists a second psychic system of a collective, universal, and impersonal nature which is identical in all individuals. This collective unconscious does not develop individually but is inherited. It consists of pre-existent forms, the archetypes, which can only become conscious secondarily and which give definite form to certain psychic contents.”

Jung also made reference to contents of this category of the unconscious psyche as being similar to Levy-Brul's use of collective representations or "representations collectives," Mythological "motifs," Hubert and Mauss's "categories of the imagination," and Adolf Bastian's "primordial thoughts."

Jung's writing style has often been described as dense and technical, which might have contributed to the definition of the Collective Unconscious being misconstrued as an inheritance of accumulated experience from preceding generations.