In general usage, complexity tends to be used to characterize something with many parts in intricate arrangement. The study of these complex linkages is the main goal of network science. In science there are at this time a number of approaches to characterizing complexity, many of which are reflected in this article.

For lessons on the topic of Complexity, follow this link.

The approaches which embody concepts of systems, multiple elements, multiple relational regimes, and state spaces might be summarized as implying that complexity arises from the number of distinguishable relational regimes (and their associated state spaces) in a defined system. Some definitions relate to the algorithmic basis for the expression of a complex phenomenon or model or [[mathematical modelling|mathematical expression, as is later set out herein. 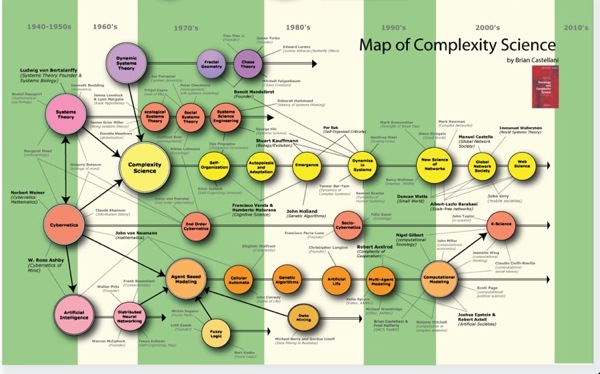 One of the problems in addressing complexity issues has been distinguishing conceptually between the large number of variances in relationships extant in random collections, and the sometimes large, but smaller, number of relationships between elements in systems where constraints (related to correlation of otherwise independent elements) simultaneously reduce the variations from element independence and create distinguishable regimes of more-uniform, or correlated, relationships, or interactions.

In Weaver's view, disorganized complexity results from the particular system having a very large number of parts, say millions of parts, or many more. Though the interactions of the parts in a 'disorganized complexity' situation can be seen as largely random, the properties of the system as a whole can be understood by using probability and statistical methods.

Organized complexity, in Weaver's view, resides in nothing else than the non-random, or correlated, interaction between the parts. These non-random, or correlated, relationships create a differentiated structure which can, as a system, interact with other systems. The coordinated system manifests properties not carried by, or dictated by, individual parts. The organized aspect of this form of complexity vis a vis other systems than the subject system can be said to "emerge," without any “guiding hand.”

The number of parts does not have to be very large for a particular system to have emergent properties. A system of organized complexity may be understood in its properties (behavior among the properties) through modeling and simulation, particularly modeling and simulation with computers. An example of organized complexity is a city neighborhood as a living mechanism, with the neighborhood people among the system’s parts. [3]

Sources and factors of complexity

The source of disorganized complexity is the large number of parts in the system of interest, and the lack of correlation between elements in the system.

There is no consensus at present on general rules regarding the sources of organized complexity, though the lack of randomness implies correlations between elements. See e.g. Robert Ulanowicz's treatment of ecosystems. [4] Consistent with prior statements here, the number of parts (and types of parts) in the system and the number of relations between the parts would have to be non-trivial – however, there is no general rule to separate “trivial” from “non-trivial.

Complexity of an object or system is a relative property. For instance, for many functions (problems), such a computational complexity as time of computation is smaller when multitape Turing machines are used than when Turing machines with one tape are used. Random Access Machines allow one to even more decrease time complexity (Greenlaw and Hoover 1998: 226), while inductive Turing machines can decrease even the complexity class of a function, language or set (Burgin 2005). This shows that tools of activity can be an important factor of complexity.

In several scientific fields, "complexity" has a specific meaning :

There are different specific forms of complexity:

Complexity has always been a part of our environment, and therefore many scientific fields have dealt with complex systems and phenomena. Indeed, some would say that only what is somehow complex – what displays variation without being random – is worthy of interest.

While this has led some fields to come up with specific definitions of complexity, there is a more recent movement to regroup observations from different fields to study complexity in itself, whether it appears in anthills, human brains, or stock markets. One such interndisciplinary group of fields is relational order theories.

The behaviour of a complex system is often said to be due to emergence and self-organization. Chaos theory has investigated the sensitivity of systems to variations in initial conditions as one cause of complex behaviour.

Recent developments around artificial life, evolutionary computation and genetic algorithms have led to an increasing emphasis on complexity and complex adaptive systems.

Systems theory has long been concerned with the study of complex systems (In recent times, complexity theory and complex systems have also been used as names of the field). These systems can be biological, economic, technological, etc. Recently, complexity is a natural domain of interest of the real world socio-cognitive systems and emerging systemics research. Complex systems tend to be high-dimensional, non-linear and hard to model. In specific circumstances they may exhibit low dimensional behaviour.

Complex strings are harder to compress. While intuition tells us that this may depend on the codec used to compress a string (a codec could be theoretically created in any arbitrary language, including one in which the very small command "X" could cause the computer to output a very complicated string like '18995316'"), any two Turing-complete languages can be implemented in each other, meaning that the length of two encodings in different languages will vary by at most the length of the "translation" language - which will end up being negligible for sufficiently large data strings.

These algorithmic measures of complexity tend to assign high values to random noise. However, those studying complex systems would not consider randomness as complexity.

Information entropy is also sometimes used in information theory as indicative of complexity.

Computational complexity theory is the study of the complexity of problems - that is, the difficulty of solving them. Problems can be classified by complexity class according to the time it takes for an algorithm - usually a computer program - to solve them as a function of the problem size. Some problems are difficult to solve, while others are easy. For example, some difficult problems need algorithms that take an exponential amount of time in terms of the size of the problem to solve. Take the travelling salesman problem, for example. It can be solved in time O(n22n) (where n is the size of the network to visit - let's say the number of cities the travelling salesman must visit exactly once). As the size of the network of cities grows, the time needed to find the route grows (more than) exponentially.

Even though a problem may be computationally solvable in principle, in actual practice it may not be that simple. These problems might require large amounts of time or an inordinate amount of space. Computational complexity may be approached from many different aspects. Computational complexity can be investigated on the basis of time, memory or other resources used to solve the problem. Time and space are two of the most important and popular considerations when problems of complexity are analyzed.

There exist a certain class of problems that although they are solvable in principle they require so much time or space that it is not practical to attempt to solve them. These problems are called intractable.