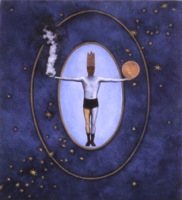 Middle English, from Anglo-French conjurer, from Latin conjurare to join in taking an oath, from com- + jurare to swear

b : to practice magical arts

Conjuration in traditional and most contemporary usage refers to a magical act of invoking spirits or using incantations or charms to cast magical spells. In the context of legerdemain, it may also refer to the performance of illusion or magic tricks for show. This article discusses mainly the original and primary usage, describing acts of a supernatural or paranormal nature.

The word conjuration (from Latin conjure, conjurare, to "swear together") can be interpreted in several different ways: as an invocation or evocation (the latter in the sense of binding by a vow); as an exorcism; and as an act of producing effects by magical means.

The word is often used synonymously with terms such as "invocation" or "evocation" or "summoning", although many authors find it useful to maintain some distinction between these terms. The term "conjuring" is also used as a general term for casting spells in some magical traditions, such as Hoodoo. In that context, amulets and talismans are often kept in a "conjure bag" and "conjuring oils" may be used to anoint candles and other magical supplies and thus imbue them with specific magical powers.

Alternatively, the term "conjuration" may be used refer to an act of illusionism or legerdemain, as in the performance of magic tricks for entertainment.

One who performs conjurations is called a conjurer or conjuror. The word (as conjuration or conjurison) was formerly used in its Latin meaning of "conspiracy".[1]