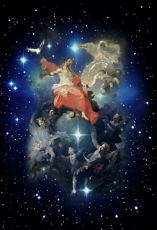 Constellation Fathers are the administrative rulers of the constellations and belong to the Vorondadek order of local universe sonship. When commissioned to active duty in the universe as constellation rulers or otherwise, these Sons are known as the Most Highs since they embody the highest administrative wisdom, coupled with the most farseeing and intelligent loyalty, of all the orders of the Local Universe Sons of God. Their personal integrity and their group loyalty have never been questioned; no disaffection of the Vorondadek Sons has ever occurred in Nebadon.

The Psalmist knew that Edentia was ruled by three Constellation Fathers and accordingly spoke of their abode in the plural: "There is a river, the streams whereof shall make glad the city of God, the most holy place of the tabernacles of the Most Highs."

Down through the ages there has been great confusion on Urantia regarding the various universe rulers. Many later teachers confused their vague and indefinite tribal deities with the Most High Fathers. Still later, the Hebrews merged all of these celestial rulers into a composite Deity. One teacher understood that the Most Highs were not the Supreme Rulers, for he said, "He who dwells in the secret place of the Most High shall abide under the shadow of the Almighty." In the Urantia records, it is very difficult at times to know exactly who is referred to by the term "Most High." But Daniel fully understood these matters. He said, "The Most High rules in the kingdom of men and gives it to whomsoever he will."

The Constellation Fathers are little occupied with the individuals of an inhabited planet, but they are closely associated with those legislative and lawmaking functions of the constellations which so greatly concern every mortal race and national group of the inhabited worlds.

Although the constellation regime stands between you and the universe administration, as individuals you would ordinarily be little concerned with the constellation government. Your great interest would normally center in the local system, Satania; but temporarily, Urantia is closely related to the constellation rulers because of certain system and planetary conditions growing out of the Lucifer rebellion.

The Edentia Most Highs seized certain phases of planetary authority on the rebellious worlds at the time of the Lucifer secession. They have continued to exercise this power, and the Ancients of Days long since confirmed this assumption of control over these wayward worlds. They will no doubt continue to exercise this assumed jurisdiction as long as Lucifer lives. Much of this authority would ordinarily, in a loyal system, be invested in the System Sovereign.

But there is still another way in which Urantia became peculiarly related to the Most Highs. When Michael, the Creator Son was on his terminal bestowal mission, since the successor of Lucifer was not in full authority in the local system, all Urantia affairs which concerned the Michael bestowal were immediately supervised by the Most Highs of Norlatiadek.[1]